DATELINE: CHOWING DOWN A LITTLE TURKISH DELIGHT – A study done at the Erciyes University in Turkey has told us what we already fucking know, ladies... the average man lasts about 108 seconds in bed. That is only slightly longer than he is required to last on a fucking mechanical bull in a bar, but it is one hell of an order to fill. Thankfully, though, those wonderful university smart people have given us the solution to the problem... feed em beer. Yes, a man with a beer belly can last up to 7.3 minutes... that is a whole 5.5 minutes longer than a skinny guy. For starters, my little Turkish friends, even 7.3 minutes is nothing to fucking celebrate! And 108 seconds? My face has a longer orgasm when I fucking sneeze. The scientific reason for this, according to the study, is because overweight men have more of the female estradiol sex hormone, that gets in the way of a man’s ability to a speedy finish. I would suggest that the reason is much more simple... it doesn’t happen so much for them, and so they have to milk it for all its worth.

DATELINE: TRIPPING THE LIGHT FANTASTIC – Speaking of studies that tell us what we are supposed to like, ladies... a joint study from Northumbria University and the University in Gottingen tells us that we are supposed to like men who dance, but not just any men... just the ones that have big, flamboyant moves. Yes, you guys who shrug your shoulders on the dance floor, you toe-trodding klutzes who need a stick planted beside you in order for anyone to see how you are moving, you are shit outta luck. The same applies to the Michael Jackson’s of the world who think we are looking below the waist, so save us the sock adjustments at the crotch, because it just ain’t gonna work. I hope to hell this means that guys will start pulling their pants up because god knows we don’t want them doing those ‘big flamboyant moves’ with the ass of their pants hanging down around their fucking kneecaps. Seriously, your Denver Haynes do nothing for me, so please keep em to yourself, especially if they haven’t been washed in the last couple weeks. The fact that money was spent on a study like this is mind-boggling. The fact that it made it into a news cycle? There are no fucking words. My question is ‘With their big flamboyant moves, does that leave them anything left for in the fucking bedroom, or does that draw on their 108 seconds?

DATELINE: ON THE FRONT LINE, PUTTING OUT THE FIRE – It could come down to the fire department in Gainesville, Florida to stop the idiotic notion of burning Qu’rans. Despite calls from the President, the Secretary of State, the Pope (yeah, I know... go ahead and laugh because I sure as hell did), generals, world leaders, soldiers... damned near everyone, Pastor Terry Jones, that mental midget who believes burning books would teach people a lesson, has remained steadfast in his plans. Facing an influx of threats coming from all walks of life, resisting the pleas of Islamic leaders who went to talk to him and reason with him, Jones has the unbelievable ability to show what an ass he is every fucking time he opens his mouth. BUT, those heroes on the front lines, the most basic first line of defence for the masses... the local fire department... has declared that the burning of books IS illegal because the ink on the pages of a book make them a toxic substance, and they have stated they will not allow the books to burn. In an interesting twist though, this morning, Pastor Terry Jones, that upright stalwart defender of all things moral and just and Christian, has changed his tune slightly. Yesterday, only a message directly from God would make him change his mind. Today, perhaps a call from the White House or the Pentagon would be as good as a call from God. This was, in essence, nothing more than a stunt to bolster his own collection plate and bring attention to his rapidly reducing congregation, and its time his two fucking minutes were up. Let us take a minute to learn though, that yes, there is nothing to discount in the power of one, especially when that one is totally nucking futs.
Posted by Bambi at 8:48 AM 1 comment: 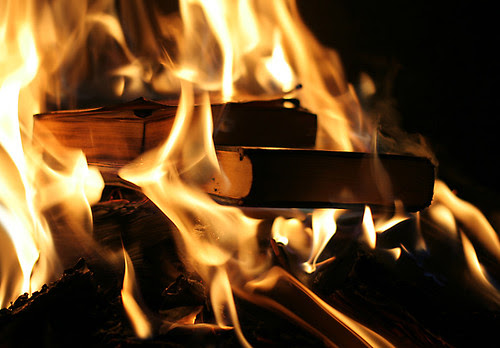 DATELINE: WHERE FUCKING STUPIDITY TAKES ON A WHOLE NEW MEANING – I am one of many people who absolutely hates the comparison of any group to Hitler’s Nazis. It would be wonderful to think they were a dead breed, that there were no more people so fucking heartless, cruel, and self-serving as those assholes were. Enter the new age Christian Bible Thumpers, or in this case Pastor Terry Jones and his Dove World Outreach Center in Gainesville, Florida. Take a minute to think of the meaning of the fucking name: The Dove World Outreach... and yet their plan? To burn holy books. Burning any book is something that totally fucking pisses me off – especially in the United States where they are supposedly enlightened, educated people who actually embraced freedom of speech AND freedom of religion in their own constitutional amendments... you know, those wonderful little collections of words embraced so tightly when they serve your own purpose, but if the religion is not Christian and the words are not to your liking, well, hell... let’s just fucking burn them. These fucking nimrods plan to BURN BOOKS – Holy books. They plan to burn copies of the Quran. How the hell many Islam people are going to sit back and say ‘well, didn’t we learn our lesson from that. We will no longer be terrorists.’ NONE, you fucking dolts! All you will do, apart from showing the colossal magnitude of your fucking stupidity is to help make even more of them believe that they are not tolerated in the free world... because, well... they are not. First off, not every Islamic person is a terrorist... not even a large percent of them... probably not even a small percentage of them, but rather an infinitesimal few are radicals, sort of like you ultra-conservative Bible-humpers, which are really no better. Secondly, Christians really do not have a hell of a lot of great history to be proud of. You remember from reading history, presupposing you can even read, about the crusades? The inquisition? Hell, there were more than a few nice little numbers like that where Christians killed indiscriminately those who did not embrace the Christian faith. Nothing like killing and destroying in the name of God. I wonder just how the hell long it will take before someone actually figures that out and realized what a fucked up bunch of people we have walking among us. Dove World Outreach – taking Hate and Asshattedness (and Irony as well) to heights it has never even hoped of going, and putting more of all our troops in even greater danger. In the name, though, of not just bitching about something, but offering an alternative, how about asking the people to pick up the Quran and read it, understand it, de-stigmatize it and help to end the fear and ignorance.

DATELINE: GETTING STONED, AND NOT IN A GOOD WAY – Sakiney Mahammadi Ashtiani is a 47-year old mother who is to be stoned to death for committing adultery. She has been in jail for five years now while this charade has played out... and now reports have been released that she received 99 lashes for appearing in a newspaper photo without her head scarf on. Now, the concept of whipping a person 99 times because they didn’t wear a scarf is asinine at best, HOWEVER, how the hell was she able to appear in a picture taken in a public place while she was under lock and key in Tabriz? Yes, they knew it was not her, and the paper, although stating it was Ashtiani in the picture, immediately corrected their mistake, but it didn’t matter. They were simply looking for a reason to be colossal asshole pricks and flog a woman again... and to hell with the reason. Any reason would do. She is now, reportedly, also charged with the murder of her husband, and to be fair I have no idea what happened to the man or when he died, but it does offer the Iranians the argument that she can be sentenced to death for murder, just as if she was convicted in any other place that has capital punishment. Of course, they totally forget the whole innocent until proven guilty thing, and based on their attitudes and track record, it is not beyond the realm of possibility that she was still in prison while he died, but what the fuck? Let’s just kill her anyways, because we don’t like her, because she is a woman. Civilized countries should take heart though, because they are now considering hanging instead of stoning... so that should make us all take a chill pill.

DATELINE: A LAND OF NO MILK AND NO HONEY – Reports released by the Save the Children foundation as well as by Unicef, the United Nation’s childrens’ agency, have concluded that simply by increasing the overall wealth of a country is doing nothing to help the children who live in poverty in those countries. Well... duh. Four million poor children are dying of neglect, something that could have been, and should have been, stopped years ago. Once again we see how the rich get richer, and the poor get to watch their babies die in their arms. According to the reports, efforts to make a difference in reducing child mortality around the world have gone terribly amiss. The truly criminal thing is that there are ways to help them, to get them food and medical supplies, but government red tape and bureaucracy... and the lining of the pockets of the rich... interfere. It is time that changed are affected, that organizations are allowed to get the help where it is needed. We live in a day and age where there is no excuse for these children to still be living in these conditions, where we have the means and ability to make sure there is food for every small stomach, where we can make a difference. Please do not sit there and bitch because you don’t have enough cell phone aps. Don’t waste your pity on the likes of attention whores like Brittney and Lindsay. There are babies starving on every continent... and its time it was stopped.
Posted by Bambi at 7:57 AM No comments: