We're On The Eve of Destruction 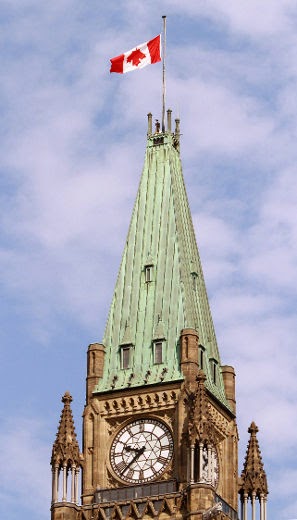 DATELINE: IN A FRONT ROW SEAT FOR THE DESTRUCTION OF DEMOCRACY – By May first – in 32 days, for those of you without a calendar – the Fair Elections Act will pass in Canada. Well, ‘pass’ is a rather inaccurate term, as it will be more a case of it being shoved down our throats, not unlike hemlock in ancient Athens. Of course, the title of the bill is akin to referring to laws regarding rape as the Demand for Love Act. You can put lipstick on a pig, but… well, you know how that one goes. Of course, the Harper Conservatives don’t see it this way. Nooo, they see it as the only way possible for them to win another election – by hook or by crook, as they say. They will steal the House of Commons, because there is NOTHING that is more important to Stephen Harper than being Boss.

Never in the history of Canada has one party changed the rules of election without thorough consultation with the other parties and without agreement from the heads of Election Canada. That is because we are a democracy, and the prime tenet of a democracy is the ability to have fair, honest elections. Without that, democracy is a farce, a cheap façade worn by power mongers who give not one single damn about the people who elected them, and who care even less for those who did not. Of course, there is the valid argument to be made that the current government, the one making these changes, is illegitimate anyways, and God knows this is not their first ‘never in the history of Canada’ achievements.

They were the first government in Canada to be found in Contempt of Parliament. That alone should have been signal enough to the electorate, but what did Harper do? He prorogued parliament in order to avoid scrutiny or asking questions (another first). In fact, he prorogues Parliament whenever the kitchen gets a bit too hot for him. His was the first government to set fixed election dates then was the first government to break that rule as well. His was the first (and second) election in Canada’s history to involve voter fraud – fraud that WAS determined to be committed by the Conservatives. In fact, this government’s record for respecting and working within the bounds of democracy is absolutely abysmal, the rules of democracy and elections discussed by them with derision, offering more than enough proof that they cannot and should not be trusted to unilaterally change the way in which they are elected.

My rage about this, however, is not at the Harper government any longer. That rage is pointless. I have written to the Governor General – a textbook definition of ‘waste of time’ since Rideau Hall is so far up Harper’s anal cavity that they have given up polishing those austere marble floors anymore and have just accepted the brown slime on said floors as a byproduct of Harper’s ravenous appetite. It’s understandable. The man gobbles up people and poops out oil – well, dilbit, to be exact, so undoubtedly they believe the floors of the GG’s mansion to instead be christened with black gold. Certainly the perks and benefits received by the government of the day, including the GG, have that rancid stench of oil clearly attached to them.

I have written to every member of the Senate. When the Fathers of Confederation dreamed up this country, they saw a bi-cameral house, where no one side could run amok with the country they so lovingly created. The Senate was to be non-partisan, a home of the wise, the worn, the well-seasoned, who would provide sober second thought and stop any monkey business should the government of the day attempt some. It’s as if they had a premonition of Stephen Harper taking a chainsaw to their glorious architecture, and wanted to have checks and balances in place to stop it before it could happen. Of course, they didn’t see that corporate greed and obsession for power would override absolutely every other principle involving government, or that their beloved Senate would be completely bastardized, turned into nothing more than a house of government whores working for a pimpish PMO.

My rage is wasted on Harper. It will change nothing. He is what he is – another in a long line of megalomaniacal (misogynist) power mongers, who dreams of more authority every night, and works for more money in his bank account every day… and the people of the country (and the country itself) be damned.

So, what can we do? Do we sit back, raise a glass to the Canada we once knew, and thumb through boutique catalogues from new corporations like Surviving Hitler, or Fascism International, hoping to find something we can use to make our ‘new’ lives more tolerable under this new regime? Our middle class has been decimated, our upper-class has been more empowered, and as we all sink to the depths of the impoverished and enslaved, we find out that this very oppression is what will prevent us from having a right to vote. Harper is creating a self-fulfilling prophecy that will crown him king of his own country in time. Is my explanation extreme? Perhaps… for now. Give the man some time.

Instead, I now ask ‘What the hell are the other parties doing about this?’ Well, I do see some of them on television, arguing the bill, but so what? What are they going to do? When it comes to stopping it, they are in the minority. As government representatives, they are completely impotent to stop this train wreck, and it shows. Flapping lips; sinking ships. I am astounded and dismayed at their lack of actually ‘doing’ something. I have waited for over a month now for them to figure it out, but it seems they just can’t. Party alliances – partisanism – runs too thick in their blood, and the need to be ‘in charge’ is too all consuming for them to be able to see beyond the trees. Because of that, all of us, and our country, and our country’s amazing stellar reputation hang in the balance.

Instead of sending out emails every fecking day of the week asking for more campaign money because ‘we have to collect more than the other guy’, how about doing something to educate the people across this country? How about doing something to organize them? Media pundits say that the public is lazy and indifferent. No, assholes, they are not! They do, however, need some guidance to get organized, and the word has to reach people who don’t have computers in their homes (yes, there still are some, and they are the ones who will be disenfranchised the most from these changes). Why are the local arms of the political parties not getting out there and talking about this to everyone? Why are they not in front of the media locally? Why are they not holding town halls, sending out fliers, AND talking it up on the social media and every other place possible? Why are the provincial arms of the political parties doing nothing like this to inform and organize? Why are the federal offices doing nothing? This is not a time to JUST sit in front of Robert Fife, Rosie Barton or Evan Solomon to pitch the same party lines and listen to the same BS spewed by Conservative members who have no intention of answering a question or providing an explanation. Is it up to just the likes of Katy O'Malley and Andrew Coyne to try to explain what is at stake here? Why are the parties doing more? Well, because they can’t go into those election coffers to spend money prematurely on THIS because then what will they campaign with next year.

This is no longer a situation where political dichotomy can rule the day. WHY ARE THE PARTIES NOT JOINING TOGETHER IN THIS FIGHT? That’s where my anger is. Get the Liberals, the NDP and the Greens together, because the stakes are pretty fecking extreme. Show the people of Canada that you can work together, that you DO care about Canada. Forget raising money for the next election, because if this bill passes, the next election is moot. It’s like saving money for a child’s college fund, then watching that child die because you didn’t want to spend the money saved for college on the medicine he needs now. Canada needs the medicine now!

There was a time when Canadians were proud of what we did. We were the peace brokers, the calming influence. If there were elections to be held in other countries, where democracy wasn’t as entrenched in their psyches as it was here, WE went to help, to oversee, to teach them about the beauty of casting a ballot, knowing that it was done on a fair, level playing field. Canada, like Rome, wasn’t built in a day, but like Pompei, the Canada we know can be wiped out in one fell blow. For us, it will be Mount Harper that will be our demise, and I have no doubt that he’s up to the task. I only wish our opposition parties were as well.


Canada is under attack… from within.
Posted by Bambi at 10:09 AM No comments: