FROM THE DRIVERS SEAT 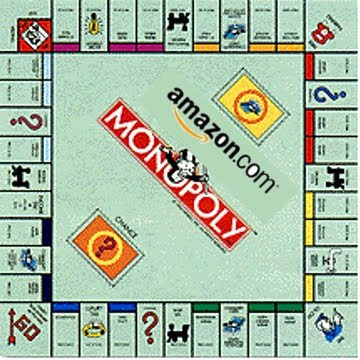 WHILE THE RICH GET RICHER...

I write books (PS... get off yer asses and start buying the fucking things!). My books are both digital and POD by design and desire. I don't want them sitting in warehouses. I don't like when books get the covers ripped off and tossed into a box to be sent back to the publisher. It's sad, it's wasteful and it's wrong. Do you have any fucking idea how much money is spent in just driving the damned things around the continent to sit in a warehouse and get shipped back? They don't fucking fly on their own wings. Each traditionally printed book makes a HUGE carbon footprint -- from the equipment to cut down the trees, to the loss of the trees, transporting them, storing them, boxing them, on down the line. So, when I went to Amazon.com and saw that 'grabmore_us', 'BooKnackrh', 'any_book', and 'brandnewgoodsus' have my books sitting in warehouses all over the continental US, I was plain bloody pissed.

When Writers AMUse Me tried to have these listing removed because none of them in fact, have ANY of my books, I was even more fuckin pissed. Where do these dickheads get off trying to undercut the price so they get the sale AND their huge chunk of the pie... all of it coming from MY fucking pocket. They didn't pay to stock the book. They don't have it in inventory. Most of them don't even have their own fucking websites either... they are Amazon 'stores' so they only appear on the same god damned page that Amazon has for the books, still with their hands out, robbing us with every bloody book they try to sell.

When WAMM contacted each and every one of these 'third party sellers', they asked for copies of the paperwork regarding these books. Let's face it... the POD companies are NOT giving the books to the distributors. Someone has to pay for each and every book when it's printed, and none of those monies have been seen. She pointed out that there was a problem, that the books were POD, that they were NOT sitting in their fuckin warehouses as they claim they are... one even had the fucking audacity to say they had 'crisp new copies' in their possession... lying bastards! When she pointed out that they are at the very least committing fraud by lying to their customers, some argued, some pulled their listings immediately, some did one fucking fine texas two-step around the issue, saying they deal with reputable distributors and they are not infringing on any copyright issue. The simple fact of the matter is they are stealing money from the writers. They are lying to get the sale for something they don't have, never had, never will have, and getting a huge payment for doing so. I would like to thank pbshopus, super_star_seller, and, after MUCH back and forth and other bullshit, Buyve: Buy to Give for removing their bullshit listings from my books, but I know they will just keep doing it to other writers... BECAUSE AMAZON LETS THEM. Amazon is creating a nice little monopoly... they print the books, they convert the digital because of their asinine proprietary Kindle formatting that no one else can have access to, they sell the books, and now they are pulling this crap... all the while putting small sellers out of business and taking more money from the pockets of the writers, and they will keep doing it... BECAUSE WE LET THEM.

BooKnackrh, any_book, grabmore-us, brandnewgoodsus and the rest of these third-party-sellers are committing theft and fraud. Ingram Books helps them, taking their own cut in the process, by including POD books on all their distribution lists, but puts no restrictions on how that information is used. Yes, third-party-sellers have value when they are in markets that amazon.com doesn't reach outside of North America. Yes, they have a place when a book is out of print... but for them to sell current, available new books on Amazon's pages, competing with Amazon for the sale, when they claim to have new books that they don't have, they are doing nothing but committing theft. It's time to shut them down. It's up to their victims... the writers, the publishers, and the readers, to step up to the fucking plate and let them know that even though times are hard and every penny is precious, it is not an excuse to allow predators to sit in wait and steal from others. It is time to stop this game, time to send them directly to jail. they should not pass go, and they should bloody well not be able to collect $200... ever again, at least not while fucking the writers.