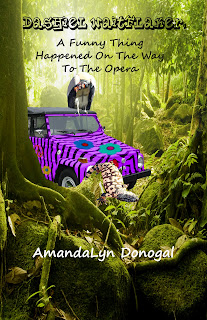 For some reason, obviously not the betterment of mankind, Bambi had to have another adventure, picking up where the first left off -- in Mexico. I can pretty much guarantee this is not the end of her though. I'm not so sure that's a good thing.

Dashiel Waitflaker: A Funny Happened on the Way to the Opera

One million dollars sure as hell didn’t go as far as it used to, even in this asshole town in nowhere Mexico. I looked around the joint. Damn, it still took my breath away, a thing of absolute beauty out here in taco hell.

“Hey, bobo, either order another chela or pay for some chaca chaca with me, but you aren’t gonna be taking up space in my joint without paying something for the damned privilege.”

The guy was a pejaro. The scruffy bastard had been sitting at that table for two hours now and had ordered one beer. He gave me that stoned look that he always had.

“Hey, Pepe, make up your muy pequeño mind before I have to get Dash or Antonio in here. You don’t want to chaca chaca with them!”

I had the gift of tongues. Who the hell would have guessed that, but these Mexican señors fell all over themselves for me. They couldn’t stay away from the joint. Who could? It had a special class. Damned good thing too, because it was about all that was left of the loot we had won.

Then... he walked in. He -- this long, lush dark piece of hairy manhood that set my juices a-flowing and my face a-glowing. Holy crap! Dark eyes, big hat brim pulled close to them so they were barely visible, and he was bow-legged! Yes! A woman of my plentiful attributes loves a man with bowed legs!

I pulled down the top of my blouse. There’s nothing wrong with letting the girls breathe a little in the heat of the day. Besides, the name on the door is Bambi’s Pink Pagoda Burrito Barn and Beer House, so I can damned well wear what I want. “Hey, Guapo, what can I get you?”

He stared at me for a moment, drinking in my beauty. I fluffed the ends of my hair. Hell, you gotta understand that my time was running out. If I wanted there to be some little Bambini’s running around, I needed to get my ass in gear. I sashayed a bit closer to him, turned on the charm. This one would probably make damned fine babies... not like the ones I imagined damned Dash would cause. Talk about a god damned train wreck that would be, not that it mattered. He and I were through, almost -- as soon as we could find a bloody lawyer who could speak English to help settle things. That asshole Dash had pissed through our money. There was no way he was getting the Pink Pagoda.

“You want tequila? Chela? Some boom-boom with Bambi?”

He was putty in my hands. I could feel him melting right on the spot.

He stepped back, looked me up and down then sat on the nearest chair. There was no doubt about it. I moved closer, let him smell my perfume. Well, truth be told, I couldn’t get perfume around here, but rubbing some of that tobasco sauce under my ear lobes had the men falling at my feet. It also helped when there was a shortage of water for a shower, and that happened more than once.

I leaned over, let my blouse fall open as I dropped one of those stupid cardboard drink coasters on the table in front of him. “You got a name, Guapo?” I jiggled a bit so he would notice them.

He chewed on the end of one of those small cigar things... too small for a cigar and too brown for a cigarette... I used to call them shitarettes because that was what they looked like. He made it look just fine, though. His eyes narrowed. “Rum.”

He pronounced it ‘rhoom’. He was so damned cute.

“I can get you a ‘rhoom’, Guapo. How about a rhoom with this hunk of burning Bambi?” I smiled at him and winked.

Okay. He was gonna be a pajaro, too? Fine. I got him a glass of rum -- passed it underneath Jeb’s perch just in case the damned bird would take a crap and add some seasoning. Of course, that useless buzzard just ignored me.

I stood back at his table, started to put the glass down, then stopped and stood straight. “No name, no rum.”

He glared. Holy crap! He had a gold tooth that I could just catch a glimpse of when he pretended to smile. “Jose.”

“Fine, Jose.” I almost threw the drink at him. Instead, I reached right in front of his ugly face and slammed it on the table. The hairs from his moustache tickled the back of my arm. “Here’s your damned rum. Drink it and get the hell out of my joint.” I held out my hand for the money. He dropped some cash in my palm. I didn’t bother to thank him. I knew there would be no tip in there. There never was. Well, almost never. There was that one time, after Maria got pissed off with her old man and came in here for a drink to calm her nerves. She dropped a tip into my hand... told me her old man wouldn’t need it any more. Of course, she never made it as famous as old Lorena what’s-her-nuts did, but what the hell? That’s Mexico for you.

I turned away from the table, headed back to the bar. He was watching me. Holy crap! He had it bad for me. Bambi was gonna get lucky tonight.

That stupid bitch I was married to never heard me come in. Probably she has so much of that greasy white cholesterol crap oozing out of her arteries and spilling into her alviolies or excrusion tubes or whatever the hell those little pipes in her ears are. I never bothered paying attention to that crap in school. I knew the damned tubes were there, and hers had to be plugged because she never heard a god damned thing. That was good enough for me.

I was behind her stupid beaded curtain. Of course, the thing was pink... everything was pink. She had that fringe shit with the little hairy balls hanging down on everything... the bar stools, the bar, the window sills. It was a blessing she didn’t know her ass from a hole in the ground when it came to cleaning; the windows were so filthy no one could see what a god damned pink nightmare they were walking into, and when you walked in here? It reeked of that horse piss smell of marijuana and stale beer. All the people who came in here smoked that crap. It was probably the only way to survive seeing god damned Bambi. Maybe I should try it? It wouldn’t be hard to score a little weed around here.

Still, she had a pretty good business going. It was the only place to get something to eat for miles around, and Antonio made a killer burrito, so people did come back. It sure as hell wasn’t for the ambience or Bambi’s bubbly god damned personality.

She leaned over, shaking her massive, disgusting tits at that guy. She thought she was god damned Charo down here, shaking and wiggling and trying to roll her Rs. Her tongue was too fat for that and she ended up sounding like Sylvester. What a stupid god damned cat Sylvester was. Every time I watched that cartoon, I was praying he would catch that damned shithead Tweetie bird then eat the annoying yellow piece of crap.

“When the hell did you get in here?”

I love you too, Darling. “None of your damned business. I still own half the business. I have to make sure you aren’t scaring away all the customers.” I never took any of her crap.

She pushed past me. “Antonio, make a couple burritos for Jose.”

There it was – nails on a blackboard. “Why in the name of all that is holy does everyone have a name that starts with a god damned J?” It was true. We never had a Fred or a Mike walk in the door. “And when the hell are you gonna just say their names normal instead of sounding like some stupid cat horking up a hairball? HHHosaay? What the hell is that?”

“Get yer sad skinny ass outta my way, Sugar britches. I got work to do and a hot man waiting to get at it with me.”
Apparently the wacky tobacky smell had fried what was left of a brain in that fat head.

“Right. Good luck with that.” I looked at Jose again. Jesus Christ, he was a mean looking son of a bitch, and for me to see that was something. They didn’t come much meaner or meaner looking than me.

Antonio set the plate on the counter for serving. Bambi pulled down her top, let those damned saggy basketball boobs dangle a bit more and rolled up the waistband of her skirt to shorten it up, flashing a calf that was about the size of a normal man’s waist. Holy crap. This was not going to be good.


You can purchase the complete collection in print, digital or kindle formats through the links at  Writers AMuse Me