DW: Dashing Through The Snow 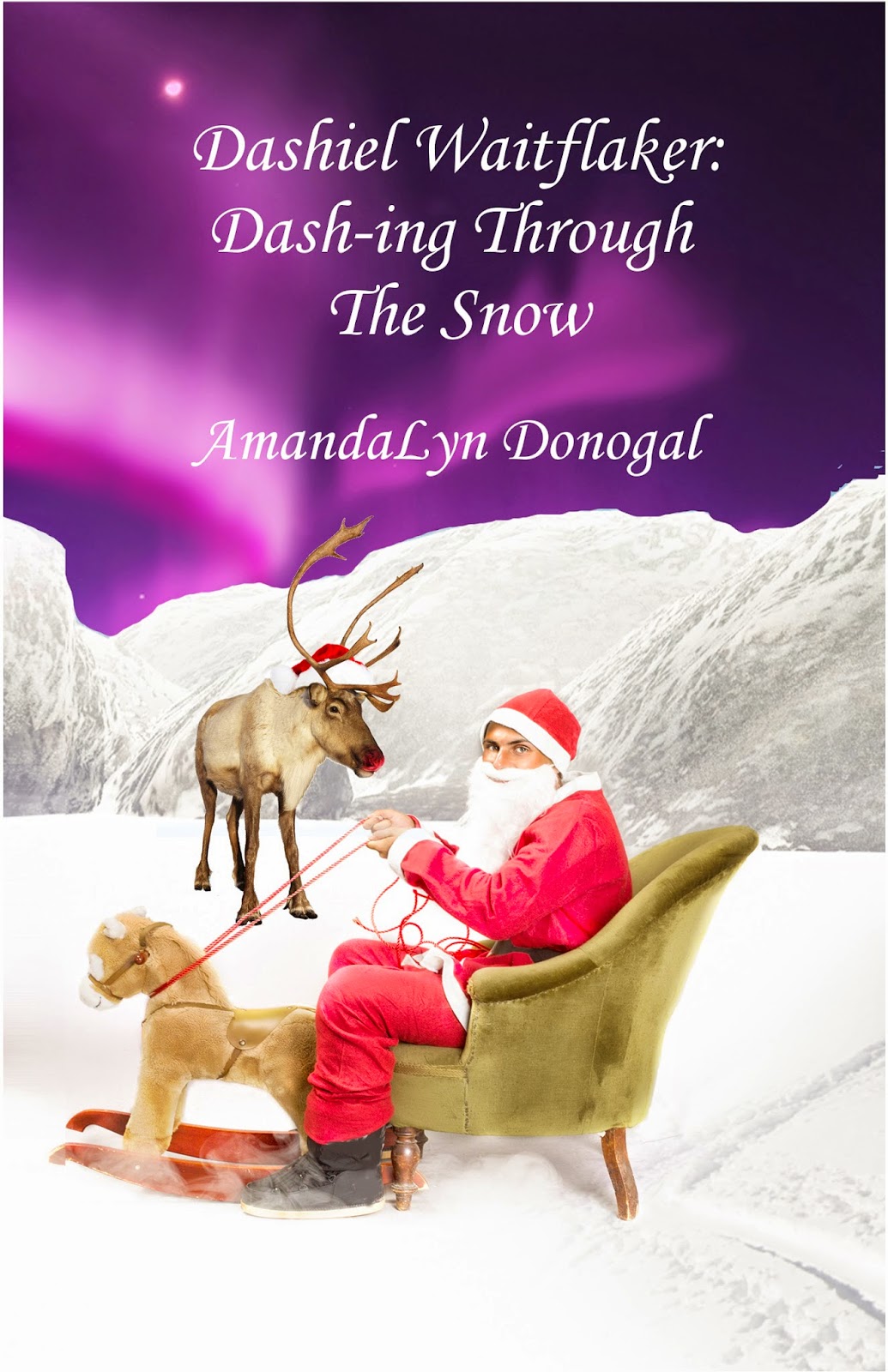 I snapped my fingers. Juan didn’t need to ask. He showed up less than a minute later with another piña colada on a tray.
“Meez Bambi.” Juan bowed as he presented the tray to me.
I took the drink then leaned forward. “It’s getting a bit hot here, Juan.” I waggled my eyebrows at him. He knew what I wanted.
Without complaint, he grabbed the suntan lotion and squirted some into his hands. He then started to run it into my skin. I growled at him, my inner cougar surfacing again. He was the best part of Cuba – my own fecking cabana boy. He was perfect – toned, tanned, dark... and everything he did pissed off Dash. I turned my head to smile at Dash, watching his blood pressure rise.
“Give the poor bastard a break.” Dash glared at me. “No one deserves that sort of torture.”

“Shut the hell up, Dash.” I turned and gave Juan my most provocative smile. “Thank you, Juan.”

Juan wiped his hands on a towel before picking up my empty glass and setting it on his tray. “Meez Bambi.” He bowed again then strode off. I watched as he disappeared into the hotel. My god, he had one fine ass on him.

“Quit drooling. For god’s sake, can’t you show even a hint of class?”

“What the hell did that kid ever do to you? Rubbing your back is cruel and unusual punishment by any standards.”

“Shut the hell up, Dash. Mind your own damned business. Juan is here to take care of me, so screw off.”

“His name is Jesus, for Christ sake! Gee-zuz. Not Juan!”

Dash was starting to annoy me – again. “It’s Hay-sus, asshole, but I was raised Catholic, so I can’t say that! It’s like... blasphemy or something. He’s getting damned good pay. He can live with whatever I want to call him.”

“Boy! Cabana boy!” I settled back on my lounger then took a calming breath. “God damned moron! That’s what you are.” I stated it as a quiet fact. “I think I’m starting to burn. My skin is so sensitive now, after you let it burn so badly on that damned boat.”

I didn’t need to look. I could feel him glaring at me.

Dash opened his mouth to yell at me but stopped when Juan showed up with my phone on his tray. I waggled my eyebrows at him again – an unmistakable ‘come hither’ look – then flicked the hem of his trunks with my fingertips. He bent over, lowering the tray to me.

“Why, thank you, Juan.” One hand reached for the phone. The one that had reached for his trunks snaked inside the material, sliding up his thigh. I shuddered at the potential hidden by that material.
Dash glared again. Juan straightened and backed away, taking the tray with him. I lifted the phone to my ear.

You could see that poor bugger cringe every time he had to come near Bambi. Who could blame him? He must have done something to totally piss off the king or emperor or whatever the hell that Castrol guy was. I had to say, though, when you didn’t have to look at the slums and scruffy poor people, he did have a pretty nice country. What the hell did I care? It wasn’t costing me a damned thing – thanks to Bambi and her god damned freakish luck.

Then again, watching Jesus putting that suntan oil on the fat bitch was sort of like watching someone oiling up warm lard. The poor bastardo will suffer flashbacks from that for the rest of his god damned life.

She still hadn’t noticed that he only spoke two words to her. I think he was afraid to say more, that with his poor grasp of the language, and Bambi’s eternally overcharged hormones, he might say something that would only lead to disaster. The last bugger she did that to died from it, but let’s not go there! Truth to be told, though, Jesus was one fine specimen – not a lot unlike me in my prime, which would be up until the day I met Bambi.

We had been in Cuba for only a few days... surprisingly our pictures weren’t hanging on the post office wall yet, but I knew it was just a matter of time. That stupid Bambi would find a way to land us in the middle of a disaster, and we would be here, in fecking Cuba, where no one would be able to help us, and I would end up serving a life sentence of having to run oil all over some other Bambi – like I hadn’t already served that sentence since we got married in god damned Saskatchewan.
“Oh Dash!”

I didn’t turn. She said it in that long drawn out Mary Tyler Moore way – ohhhhhhh Daaaaashhhhhh. It was a harbinger. I just knew it.

“My uncle Flockington has died.” Bambi sobbed and sniffled as she spoke.

Her palm smacked the back of my head. “My uncle! I just told you that.”

I didn’t point out that she had miraculously stopped crying in order to correct me. Alligator tears – that’s all the bitch was capable of. I played along. “Oh no, your uncle Flockington is dead? What happened... and why the hell should we care?” I dodged the swinging palm this time.

“He was my favor uncle.”

“So why the hell haven’t I heard about him before?”

She glared at me. She did that whenever I asked something that required logic. “I haven’t seen him for a while.”

He was a relative of Bambi’s and she thought he was eccentric? Yeah, we were talking either very normal, or he was totally bat crap crazy. My money was on the second option. “Lemme guess. You want to go to the funeral, right?”

“Well...” She hesitated. It was time to prepare. “No, not exactly. The funeral was a couple weeks ago.”

“A couple weeks ago?” Now she was pissing me off. “So what the hell do we care about Uncle Flockington being dead then?”

She smiled. It was that piggy-eyed shit-eating smile that I hated. “I’m in his will. I have to go to the reading.”

“His will?” Holy crap! Someone actually had an uncle who died leaving an estate to a niece, and it had to be Bambi.

“Yeah.” There was no trace of sorrow in her voice now. “So get your ass up out of that chair, get some clothes on, get packed and let’s burn some rubber.”

I stood, but made sure she would see I wasn’t happy about it. “Fine. Where the hell did Uncle Flockington live?” Bambi mumbled an answer. I had no idea what the hell she said, but fully understood that she intended it that way. I wasn’t going to budge. “Bambi, where the hell are we going?” I crossed my arms for emphasis.

I raised a brow. “Could you be a bit more specific?”

Jesus appeared at my side with a bottle of beer. “Meester Dash.”

“Jesus Christ, not you! The other one!”

“Where the hell are we going?”

“Alaska, okay? We’re going to Alaska... but he was totally loaded. We have to go. One day, then we can get the hell out of there and it will be easy street for the rest of our lives.”

I didn’t believe it, not for one minute, but I also knew there was no point arguing. We were heading to Alaska.