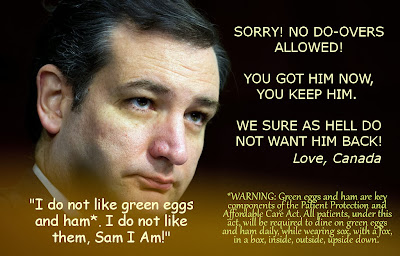 DATELINE: THE HORSE IS DEAD BUT WE ARE STILL WATCHING THEM FLOG IT – On March 23, 2010, in the United States, the Patient Protection and Affordable Care Act (PPACA) became a reality. That’s how it works in politics – bills are proposed, presented, voted on and either passed or rejected. Not everyone is happy about it; that’s also how it’s supposed to be. Those who saw problems with the bill should accept that the majority had spoken, and turn their attention to helping make the program as effective and efficient as possible. That’s their job. That’s what they are paid to do – for bills they like and the ones they don’t like. Let’s face it, there is nothing that will be passed through any political body that makes everyone happy; that’s simply not possible. Those opposed have perspective, though, and should then use that to help make it the best possible.

Since March 23rd, 2010, there was a presidential election. Because that election returned Obama to the oval office, his PPACA was, in essence, given majority approval by the population of the United States. Nevertheless, also since March 23rd, the US Congress, led by John Boehner and the GOP, has voted AGAIN on the Affordable Care, not once, not twice... but 42 times. This by itself is inconceivable. No other bill in no other government has gotten 42 do-overs, still losing every one, yet still insisting on one more kick at the cat.

Now though, the GOP has attached a rider to their attempt to quash PPACA. They have decided that if they don’t get their way, they will refuse to make available the money necessary to keep the country running. That means that, first and foremost, those people in the military will again take it on the chin. It means that those who depend on their pension checks are out of luck. It means that crime will run amok as prisons are unattended. Think about what your government does... then imagine no one doing any of that. This is a tactic that will not hurt any corporation and it will not hurt anyone sitting in Congress or the Senate because, well, they have already taken care of themselves.

Ted Cruz stood for 22 hours in a very deliberate attempt to stop the wheels of congress, to stop debate and discussion. He talked about the outrage of the people of the country because nothing is being done. HOW THE HELL DARE HE! He said that the people of the country are getting frustrated. HOW THE HELL DARE HE! He is reading Green Eggs and Ham, a book about trying things that you are 100% opposed to, as he throws his tizzy about having to swallow ‘Obamacare’. Wow. Absolutely everything he is doing is blatantly a slap in the face to the working, struggling people of the country, and he knows it.

Ted Cruz’ actions would be less disingenuous if he offered options to the problems he sees with PPACA. He would have much more credibility if, rather than supporting the gouging insurance companies and taking political contributions from big pharmaceutical companies. If he wasn't firmly and comfortably ensconced in the pockets of Corporate America, people might give a shit about what he has to say. His objections have nothing to do with the working people, the sick people, the tired people, the struggling people or the retired people of America.

Conveniently enough, issues like oil pipelines can’t be discussed or debated – they don’t want that because that might mean scientific and statistical information might come out that doesn’t support their position. They can’t discuss GMO’s and fracking, things that can and will kill hundreds of thousands of people, while politicians sit back and plead ignorance about letting the companies doing these things run roughshod through peoples’ lives. There are too many issues that they just don’t want to deal with, so let’s waste time flogging an already long-dead horse.

So, neglecting their duties for two years, while pulling in huge paychecks and donations from their corporate sponsors, while people continue to suffer in ways that they should not be suffering, wasn't enough. Playing silly-bugger with the government finances, imposing even more hardships on retired people and the military while they carry on with this charade of legislating FOR the people was not enough. That wasn't enough of a threat. It didn't work, so now they threaten to shut down the entire country. I guess you don’t have to look very far to find those new-fangled American home-grown terrorists, because they ARE playing with peoples’ lives, they are threatening livelihoods and ways of life and they are using fear and trying to force capitulation. Beware the enemy within.

The GOP has more than proven themselves to be nothing more than self-serving thugs. In essence, all thugs are self-serving; the only way to stop them, though, is to have someone with the balls to stand up and be counted, to say ‘Enough!’ Washington is, apparently, infested with thugs – corporate and political. Sadly, I have no idea who the hero will be in this scenario, who will stand up for the people, who will actually do what he/she took an oath to do. All evidence so far, though, shows that it will not be Obama. He was a man who talked the talk, but he sure as hell doesn't walk the walk. More’s the pity, and good hardworking Americans continue to foot the bill.
Posted by Bambi at 12:10 PM No comments:

DATELINE: KNOWING WHEN TO FOLD EM - I sat for three and a half hours yesterday, watching the US Senate hearings regarding a response to the crisis in Syria. I did this because, as a Canadian with many attachments to people on the southern side of the 49th, I believe this is a very critical point in history. I did this because I recognize that the results of this decision WILL impact me – it could result in more threats to security to all of us, it could require that friends and their loved ones will be required to serve in Syria, it definitely could set a precedent for future diplomacy around the world and it very much will have an impact on the global economy, especially if the wrong decision is made. I felt it was important because trillions of dollars and tens of thousands of more lives, Syrian and American, could be at stake. I watched because I wanted to know if there was more information, more learned opinions who are familiar with the situation offering possible alternatives or different insights as to whether or not someone should interfere. I watched this because it could change how regimes are dealt with, how civil wars are dealt with in the future. I needed to know more because I am concerned about the credibility and efficacy of the United Nations, and in particular the UN Security Council, that appears farcically impotent at best. There were many reasons to watch, or to at least keep tabs on the discussions and questions.


I was not paid to be there, as every one of those people in that senate chamber were. In fact, they are paid damned handsomely for sitting in there. As I listened, though, I thought about family members who had fought in wars, who had been injured in wars... I have interviewed many over the years in the course of doing research, and I thought about every one of them, and how they talked about war. I thought about their perspective of war – the perspective of men and women who agreed to defend the country, who are paid peanuts to do so, but who nonetheless do as they are ordered, despite their own personal concerns or disapproval of the action. There was none who didn’t have a story about an asinine order issued from a commander. Now, commanders are human, and they make mistakes. Some of them do what they think is best for the right reasons. Overall, they accept that the person one rank higher than them always had their backs, that someone would be watching out and making sure the stupidity was cut off at the knees. It is imperative for those in uniform to know, to be able to trust, that those making decisions are doing so in a dedicated, informed, responsible manner.


So, enter Senator John McCain. This is a man who wore a uniform, who spent time as a POW, who has tried to become President of the United States, and probably, sadly, will try again. Not only does he disrespect... blatantly disrespect... the people of the United States, the people in the countries around the United States and around Syria, the people of Syria, the men and women wearing uniforms but he also disrespects... blatantly disrespects... the other people in that senate chamber, by playing god damned games on his cell phone instead of paying attention. It was three and a half hours. He can’t sit and pay attention for that long? Well, then, Mister McCain, it’s time for you to check into the senior’s home and see if you can handle a whole game of scrabble in one sitting. God knows the troops who could end up involved because of a misstep by the US government would be committed to something a hell of a lot longer than three hours.


So, while I was incensed by McCain’s indifference and disrespect, his tweeted response and all his subsequent responses today should have him standing in a dock facing treason charges. He blows off the concerns by flippantly complaining that he lost pretend money? We’re talking lives and potentially trillions of dollars, and a global economy, and this moron is seriously making comments about his poker money? He is implying that people have no right to be mad or question him. He is implying that a three hour meeting is more to expect from any human being... what with their crystal water glasses, plush chairs, and minions waiting on you. If I was paid to sit in a meeting for three hours and I pulled out my phone to play a game on it, my ass would be out the door so fast, my head would be spinning, so how the hell dare you, Mister McCain, how the hell dare you criticise people for expecting that you at least pay attention.


It is to be hoped that the next time John McCain next appears on a ballot, that those who support him are too damned busy playing on their cell phones to be able to find their way to the voting booth. It’s hard to believe, though, that they would not just laugh him out of the state.
Posted by Bambi at 8:50 PM No comments: