I HAVE A DREAM; IT SURE AS HELL ISN'T ABOUT WAR 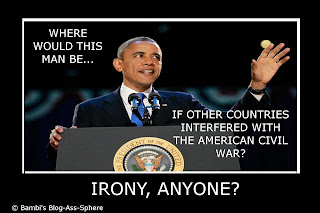 DATELINE: SITTING ON THE AIRRAFT CARRIER, WAITING FOR THE 'MISSION ACCOMPLISHED' SIGN TO UNFURL... AGAIN -- This, on the week where we watched, celebrated and remembered the words and deeds of Martin Luther King Jr, is unbelievable. You simply can't make this shit up. Those who know me, know that I am not heartless. Seeing an image of a child sick or hungry will bring me to tears. When researching history, I am sickened by the horrid things man has done to man, for the sake of power, for the sake of some asinine religious ideal, for money and fame. I have made no secret of the fact that I believed that there was a need to diplomatically intervene in the situation in Syria, to work towards stopping the brutal regime of Bashar al Assad. That said, it sickens me that there is any sort of discussion regarding any other country using military force. It astounds me that, again, we haven’t learned.


What is to be accomplished by a military response in any fashion? Only strategic military targets will be attacked? Well, that’s nice, but Assad is not a fool. He has moved his targets, left nothing but empty shells of buildings for anyone else to aim at. Munitions will be in hospitals, schools, residential areas where he can use his people, the people who were demanding change from him two years ago, as his shields. He has moved some supplies out of the country, with the help and under the protection of whatever bat-shit crazy despot of the day is calling the shots in Iran, and with the support and assistance of Putin. There is no reason to believe that other countries are not also supporting Assad, whether or not they agree with what he does but because they have to on principle – they cannot afford to have other countries interfering in what they do, and they will want to stop that before it happens again. Iraq is still fresh in their momories.


So there is no effective target to take out. It requires an escalation, so more missiles are fired, more bombs dropped, more guns fired. Why is going to be hurt by that? Well, the people who are living there, just wanting this to end. Yes, technology makes aiming a weapon more exact, but even with that, please look at the number of people who have perished in Iraq and Afghanistan. Adding more weapons, and more soldiers, puts more people at risk. How, then, does all this end? Well, if it’s Afghanistan or Iraq, it doesn’t. Every other war has ended with diplomatic negotiations. Why can’t we skip the middle-man, avoid the extra deaths and thousands of maimed people, and cut right to the chase?


Wait! Let me answer that. We can’t because our politicians are in the pockets of the people who are sitting back with shit-eating grins on their faces, applauding the President of the United States for taking the bait – and yes I really do believe it’s bait; Obama, through his own self-righteous stupidity in drawing ‘a red line’ that was unenforceable, backed by a lot of bullying in the media, is walking into a trap from which there is no escape. Think about how much one plane, one missile, all the technology, the bullets, the guns cost. It shouldn’t be hard. The last two wars have cost billions of dollars each year, and countless lives that should not have been on the bargaining table in the first place. The people who own those companies, who also support their political party of choice (which tends to be whichever one is in power, because they like to hedge their bets) are over the moon about this. Ka-ching, Ka-ching, they can hear those new cars rolling up and those new mansions being built, with no regard for the hard work of taxpayers who foot the bill, or for the blood that will be spilt. Missiles are their blood diamonds.


But there is another equally as pertinent reason for not going into Syria. It’s not anyone’s business. Harsh? Hell yes, but this is not a time to be pussy-assed about it. The Syrians are using chemical weapons on their own people. Well, the US government used Agent Orange in Vietnam, exposing civilians and their own soldiers to an incredibly cruel, heinous death. They didn’t know it would do that? Bullshit. They knew it would do that, because it did that to the people exposed to it ten years earlier in Korea. They then buried the crap in landfills, near water supplies, still knowing what it would do, hoping that by forbidding anyone from talking about it, things would be perfectly fine. Weapons of mass destruction? Does that include Napalm? Where the hell does the US or any other country, get off in condemning anyone for doing what they have already done with impunity.


Don’t get me started on the allowing of the contamination of water, which is no different than throwing Poison in the town well, and their back-pocket association with companies who daily add poisons to our food, genetically modifying it so that it has no nutritional value but does keep the coin rolling in for Monsanto.


The other reason it is no one’s business is because this is a civil war. The people of Syria wanted change, and they stood up, impassioned, determined, wanting to own their freedom and their future. It is no different than what black people did in order to get to sit on any bus seat or eat in any damned restaurant they wanted to in the US. It was no different than the American North going to war against the South over a principle. What would have happened if France had lobbed bombs and put soldiers on the ground in America during that war? What if Germany had said ‘we are opposed to that, so we are going to come in and pick sides’? Would there be an African American US President if the country had not been allowed to deal with the issue the way they had to?


Yes, war is ugly. It’s ugly on the battlefields and in the homes of the people caught in the middle. It is even uglier, yet better disguised, in the back rooms, the marble halls where decisions are made over cognac and caviar, while businessmen dream of counting the cash they will have in their vaults. It’s time people wake up. War IS hell and it should always, and forever, be a last resort when a sovereign nation is threatened by another. The people of Syria have the right and the need to deal with this, to cause the changes they need and demand in their lives, and it is no place for anyone else to try to pick sides.
One again, we hear that this is necessary for international security and safety. Sorry, that ship sailed. The argument has no credibility. The last time, we found out the argument was nothing but a string of lies. The argument is stronger that for the sake of international security and safety, military involvement must be avoided. Declaring war on Iraq because of their WMDs did nothing to make the world a safer place. Now Mr. Obama is referring this issue to Congress, that austere body of politicians who cannot even agree on the purchasing of a damned stapler, and talk of reinstituting the draft raises its ugly head.


So, do I want to sit here every night and look at the torture Al-Assad unleashes on children and families? No, absolutely not, but what I want in this regard is not germane to the discussion. The answer, though, is in diplomacy and in legal avenues, not war. If Al-Assad is guilty of crimes against humanity, charge him, lock him up, try him and deal with it, while letting his country heal and rebuild. Provide him a place to meet with HIS enemy, broker the deals, do the backroom diplomacy that proves the worth of a real leader. A real leader works to keep his people OUT of harm’s way, works to make the world better, and he does that by example, through dialogue, through empathy, through patience, and through tolerance, exampling all these things along the way. We have created international laws and international courts; why can’t we give them the opportunity to work?


Bashar Al-Assad is evil. There is no debate about that. There are a lot of evil men in the world, and the way to deal with them is through the courts. He should have been reined in two years ago, being held accountable to international courts. Instead of adding more lives to the cost ledger in this civil war, fix the United Nations, which is nothing more than a pathetic, sick joke. There is much that needs to be done, and much that can be done. More military involvement is not one of them.
Posted by Bambi at 6:52 PM No comments: