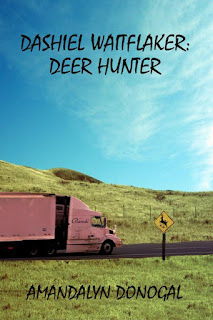 CHAPTER 1 – THANK YOU FOR VISITING DOGPOUND

I was just outside Dogpound, a little shithole town between nowhere and the asshole of the earth, when I pulled over. The passenger door opened. Adolf braced his front paws on the headrest and barked his warning. I looked down and shook my head. “You getting your sorry ass up into this rig, or you just gonna stand there and let the cold air in?” He wanted a welcome, and that was just what he got. It was the best I was gonna give him.

Long skinny legs lifted him in. A mild Chinook wind would be enough to land the poor bugger on his ass. What the hell had I just opened my door to? Damn, when would I learn? I was just too damned kind and caring.

“There’s a towel behind the seat. Dry yourself off before you fog up the inside of my windshield. How the hell long you been standing out there?” I took my eyes off him long enough to check my mirror and put my truck in gear. “Damn, you are one sorry looking dude. Where the hell you going?”

“To the land of none-of-your-goddamned-business. Just drive.”

What the hell was this? I laughed. Finally, a guy with some guts – obviously a dumbass bastard, but he had guts. “Where the hell did ya get that voice? Must have been from the basement bin. Sounds like it comes from well beyond your ass.” It was one hell of a voice, deep and velvet, could probably melt butter but there was no way I was telling him that. Besides, I was immune to those sorts of charms, any sorts of charms, at least of the male persuasion. Men were bad news. It was simple as that. There wasn’t a good one among em; some of em just hid the bad better. This one was bad from the word go, and he made no attempt to hide that fact. I liked that in him.

He rubbed the towel over his head like he was scrubbing a shit-covered dog. His face was long and lean, like the rest of him. He was scarred, well worn, had obviously seen a lot of life. Adolf was still barking his damned head off. I tapped him on the nose. “Shut the hell up, Adolf. For god’s sake, I don’t think we need to worry about this one.” I flashed our new guest my best smile. “This long drink of water ain’t gonna try nothing. I could beat the crap outta him in two seconds. Don’t worry, though.” I reached back and scratched his teeny ears. “If it comes to that, you can have his nuts.”
I knew this asshole was taking inventory. His eyes wandered around the cab.

“I’m heading north for a bit, then east. Lemme know when you want out.” It might be sooner than he thought. The breakfast burrito I had in Cochrane was already rumbling around inside my guts, and there was no way the windows were being opened on my baby. Adolf hated driving with the windows open.

He had those eyes, those damned eyes that were… well… there was something different with them. What the hell color were they, anyways? There were barricades up in em, walls that must be hiding a lot of other shit. I was shifting my way up the damned hill. My baby hated doing that hard work, so I had to coax her along. She had a long run ahead of her and it never paid to piss her off this early in the trip. My palm massaged the damned stick. Come on baby… you can do it. Those damned eyes… they were taking in everything.

“So… since you’re such a goddamned gentleman, perhaps you would like to at least tell me what the hell I should call ya? You’re in my rig, after all.”

He stared at me – damned icicle darts. He didn’t answer.

“The dog’s Adolf. I’m Bambi.” There. Maybe that would make a difference, make him say something, open up the lines of friendly communication. I’m nothing if not a diplomat.

He scowled at the dog, turned to look at the trees flipping past, talked to his window. “Waitflaker. The name’s Waitflaker. Dashiel Waitflaker.”

Damn! I knew from the moment I opened that bloody door I was in for it. She was the ugliest bitch I ever set eyes on, and her voice? Goddamned blackboard nails would be easier to listen to. It took a minute for my eyes to focus with the change of the light of the cab – it was nothing more than a pink haze.

You ever get that thing where there is a yapping in your head, just an annoying continuous yapping? That’s what was happening to me, and it seemed to come from behind this broad’s head. Holy shit, she was big. Big enough to burn diesel and probably fart black. I already knew the last half of that sentiment to be true. I scrunched my noise but she probably didn’t notice. Sweet Jesus, it stank in there. I was cold and damned wet and wanted to get out of the bloody Canadian weather. I don’t know what the hell these people did to piss off the big man, but it must have been something bad to get this weather. As for the bitch behind the wheel? So much for the goody-goody Canadian reputation. God and I knew better. On the good side, her foul farts helped to warm me up faster. I had been around worse before; probably would be again.

She had jowls, for Christ sake… jowls that shook with the vibration of the goddamned truck. Damned jello jowls. And the yapping! I had to look twice to make sure. It was a goddamned pink poodle… pink! ...The size of a damned hamster, yapping its god-awful head off. One slap with my hand – that’s all it would take to shut the bloody thing up for good. What a useless piece of shit. And people think God has no sense of humor. He does, but it’s a sick and twisted one. Maybe that’s sorta why I felt at one with him. We understood each other.

I wished she would shut the hell up. Yaps as much as her dog does.

The sign said ‘Thank you for visiting Dogpound’. Dogpound? That was the name of the goddamned town? Sort of appropriate, when I thought about it. Pounded on a few there, could pound on this one, Bambi or, what the hell she call this mutt… Adolf? Jesus Christ. Ugly as shit, but I suppose she might be worth a pounding after all. Any port in a storm. She was making love to the damned stick shift. This woman ain’t had a piece for one hell of a long time, prolly never had a proper one. But, damn, she is one ugly piece of work, with an ass on her the size of the goddamned Montana sky. Hell, she probably has that tattooed across it in big glorious letters. And Bambi? What the hell were her parents on! Bullwinkle, maybe, but Bambi? The goddamned crap you see when you don’t have your gun.

“So what the hell you doing out here, Sugar-britches? It’s a long way from nowhere.”

Holy Christ, she was gonna be annoying. Just so long as she drove this frigging rig and got me the hell away from here. Look at my eyes and tell me if you really want to call me dumb ass names like Sugar-britches.

“Just seeing the world. Thought I would start with the asshole and work my way up.” That should shut her the hell up.
She laughed. “Seen one asshole, you seen em all. At least now you can’t be disappointed in whatever comes next.”

I wanted a smoke. I couldn’t stand puffing on a cigarette to be honest, but the ‘no smoking’ sign dangling over the window made me think it would be a good thing to start up. I might have something to give up for lent or whatever the hell you called it. God would like that. He knows, just like I do, that the whole giving-up thing was a riot, another load of papal bullshit meant to scare people into doing what the church wanted them to do. Maybe the pope and god were on to something after all.

I wished she would quit looking at me. She has little pig eyes, a little turned up at the tip nose. I’d seen that face before, a whole goddamned row of that face, little beady eyes and dirty snotty snouts looking up at me through the fence as I carried the slop bucket at old Uncle Farnsworth’s place. Now there was a piece of work. Drunken bastard, smacked around everyone but the bloody pigs. He loved em. Maybe he’d like Bambi. Hey, Uncle Farnsworth… you looking over here? Whatcha think of this one? Funny thing; no one ever found that bastard. He liked to smack stuff around – too much. I walked in one day while he was smacking Aunt Ivy upside the head then he turned to take a round outta me. Ivy was stunned, laying on the ground watching goddamned bluebirds dance around her empty bloody head. She never missed Farnsworth. No one did, except maybe the pigs. Nah… they didn’t either.

“There’s coffee behind the seat. Spare cup as well. If you’re pouring, my cup gets filled first. You can stay, but when we go to fuel up, it’s your job to make sure the coffee is on and the windows are clean. I need to have clean windows.” She thought for a moment. I could smell she apparently thought with her ass most of the time. There would be huge problems if she was gonna keep polluting the bloody air like that. “Oh, yeah, and don’t forget to make sure Adolf gets a run. There are little plastic baggies in the door pocket there. You gotta clean up after him.”


You can buy the book in print, digital or Kindle formats, through the links at Writers AMuse Me