DATELINE: CELEBRATING SPRING – Arab Spring, that is. Muammar Gaddafi is dead. This would be a good time to cue the oppressed munchkins into song as they all start to look for that yellow brick road. The house fell on that slimy bastard, and now the people of yet another country, have the opportunity to live a life free from tyranny and despotism. For the people of Libya, as for those of Egypt and Tunisia, it is truly a day to rejoice. 42 years hell at the hands of one man was more than enough. Finally the future for the people of that country is something to think about, dream about, plan for. I cannot imagine what it is like to live in a place so totally devoid of hope.

Sadly, the word here is ‘celebrate’. Do not for one minute think that I mourn the death of Gaddafi. Like Saddam, like Osama, or that I will when the time comes for the likes of Chavez and Bashar al-Assad. They were/are hideous heinous vile scum of the earth… and still I find myself pondering the notion of celebrating the death of another human. It’s not something new; it is something that on some level makes me feel a twinge of guilt… and I hate that. I was raised to believe in the sanctity of life. It’s a nice pipedream, one that should be straightforward enough but is muddied by politics, hatred, violence, war, greed, and despots. Adding to my anger is that this desire to see them dead was something they brought on themselves. They made us want them dead. The choices they made, the priority they gave their lives over absolutely everybody else, their unmitigated greed, ego, hubris…. It’s a long list of qualities, but I cannot manage to wrap my brain around how anyone can think so much of themselves and so little of the rest of the world, to believe that others are there simply for the convenience and comfort of the chosen few. It’s truly sad, something that should be researched to find a cure or a preventative vaccine. I want to celebrate Gaddafi’s death, but I can’t. Instead, I will rejoice in the success of the people of Libya, their strength, their determination, and now, their futures.

What I would like to ask, though, is that while we list the names of these absolutely heinous people, we remember other names. How about remembering the name Mohamed Bouazizi? I suspect many of you are asking why we need to remember this name. Why should the name of Bouazizi slip from our lips as easily as Bin Laden, Chavez, Kim, or Ahmadinejad?

Mohamed Bouazizi was a Tunisian street vendor. He was 26 years old when, on January 4, 2011, he set himself on fire to protest the horrendous treatment he received at the hands of government officials and to make a statement that the time had come for change. He had no idea what would happen, what he would start, the number of lives he would change. Oh that he could know. Perhaps he does. This one act, this act of a man who had decided death was better than the oppression he suffered for trying to make an honest living, was the catalyst for the Tunisian Revolution. His death moved the people of Tunisia, made them rise up, lift their voices and demand change. Ten days later, President Zine El Abidine Ben Ali stepped down after ruling with an iron fist for 23 years. Mohamed Bouazizi’s death gave birth to the Arab Spring, and because of his actions, on the day that Gaddafi died, the people of Tunisia voted in democratic elections for the first time. Yes, there is a sweet fucking irony in that fact.

Because of Bouazizi, Tunisia has elections, Hosni Mubarak was overthrown and stands trial, Muammar Gaddafi was been killed, Ali Abdullah Seleh agreed to step down, the governments of Jordan, Kuwait, Lebanon, Oman, and Morocco have implemented fundamental changes. Uprisings and protests continue in Syria, Bahrain, Algeria and Iraq, where more people are seeking changed, demanding change, fighting for change and, sadly, dying for change.

While you watch your news, while you vent about politics, debates, GOP leadership candidates who do not have the brains to blow their own noses, government officials who do not have the balls to do what they should be doing because they are too concerned about being re-elected so they can spend another four years doing nothing but worrying about winning the next election, think of Mohamed Bouazizi. The next time you shrug and say ‘it is what it is’ or ‘you can’t fight city hall’ or ‘what can one person do’, think about Mohamed Bouazizi 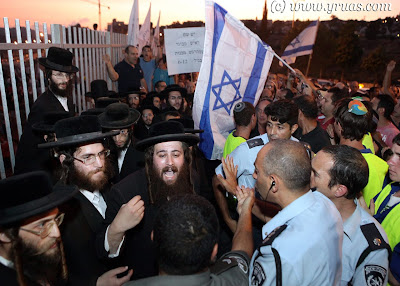 DATELINE: IN SCHOOL, LEARNING TERRORISM FIRST-HAND – Terrorism is nothing new to the people of Israel. They have lived with attacks, physical, religious, personal and otherwise for centuries. The Jews have been on the receiving end of genocide and persecution for generations, going back to the beginning of time. You would THINK they understand, then, that absolute hatred is the worst evil our world has to offer, wouldn’t you? Apparently for the extreme orthodox Jews of Beit Shemesh, a little town outside of Jerusalem, they want to give even better than they get. The subject of their hate-filled, vile, ignorant ire? The Orot Girl’s Elementary school. Yes, these grown men with their ringlets and their black hats, stand outside the school waiting for these little girls and their mothers. When they arrive, the girls are called sluts and worse, they have stones, tomatoes and, yes, even shit thrown at them as they go to and from school. These are little girls going to school. These are orthodox Jewish children being terrorized on a daily basis by grown Jewish men who SHOULD know better.

It’s amazing – I use the word amazing because that would be more politically correct than saying that it is absolutely beyond all fucking logic and common sense – that the minute ‘ultra’ or ‘extreme’ are added to any religious belief, the common tenets of all religions suddenly doesn’t apply. All of us, regardless of who is the Big Guy, are taught the ‘Golden Rule’. We all have the same holy edicts about murder, love, hate, respect… until we become a radical; then its every man for himself. We kill, haunt, terrorize, torture, mutilate, steal, and lie just to prove that our God is better than your God. How fucking stupid is that? It’s not ultra or radical or extreme…. It’s rabid, and at that point it has absolutely NOTHING to do with religion and everything to do with man’s ability to control other men, religion be damned.

So, is this hatred, this abuse, this intolerance REALLY about the way a six-year-old girl dresses to go to school – which by all standards is incredibly modest to say the least? Hell no. This has nothing to do with that. This has everything to do with… what else could there be in Israel… who controls the land. Beit Shemesh is considered an ultra-orthodox community and they do not want this sort of school anywhere around them, not even on the outskirts of their little piece of fucking heaven, so they scream and abuse LITTLE GIRLS in order to make them leave. Schoolyard bullies, eat your fucking hearts out.

We have seen the tactics of the Westboro Baptist Church in North America, we have lived the absolute horror of the attacks on US soil by Muslim extremists, we watch the news every day as people stand up to and die because of Sharia laws, we watch the struggle every day in the Middle East as good people strive to find a means in which everyone can live in peace, we listen to political extremists spew their hatred and political bullshit that has nothing to do with the issues of people living together on this planet and everything to do with the obtaining and maintaining of power and authority to tell others how to live their lives.

A very wise man once told me that ‘spirituality is God’s creation; religion was created by man’. Religion, it seems, was created by man, for solely selfish purposes – the hierarchy of the Catholic Church has proved that repeatedly. The men of Beir Shemesh may consider themselves religious – the sure as hell are nowhere near God-loving or spiritual.