Through A Cannabis Haze... 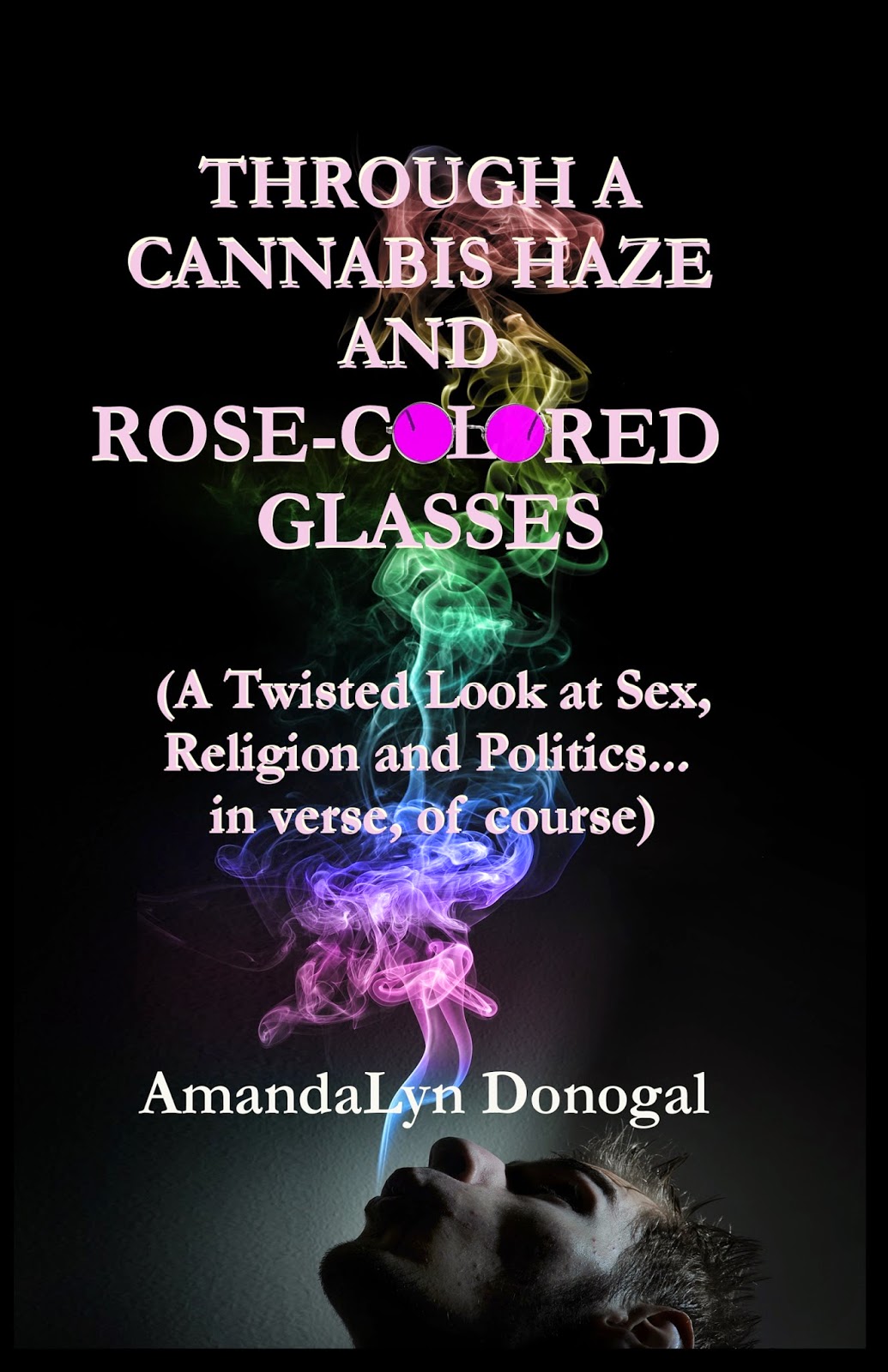 THROUGH A CANNABIS HAZE AND ROSE-COLORED GLASSES
(A Twisted Look at Sex, Religion and Politics...
in verse, of course)

Anthony Weiner’s crotch-shots, Mylie’s twerking, government not working, and a boatload of stupidity fill our days and our newspapers. Perhaps it’s time to put some of that into perspective – in poetry – that makes no pretense at being delicate, politically correct or even a bit cautious. Nothing is sacred in this collection of jabs and observations… not even baseball. Of course, it's not all jabs and pokes, but it's all delivered without hesitation, and oft with a tad of sarcasm.

To all the politicos, pros, pundits, prayer mongers, and pains in the ass who make me insane enough to want to write poetry. I blame you for this.

In Pontifical Profundity
And political profanity
A pose, puritanical at best
The vagina is procreational
And never recreational
Except at god-like penis’ bequest.

It says here in my Bible
So bite me, it ain’t libel
Sex for only procreation is allowed
So tighten up that belt so chaste
For there is no time to waste
Our purity the clergy has avowed.

So despite that little nit
That every woman has a clit
Intended solely for her joy in passions’ thrust
In sex she must not partake
Without intent to procreate
In the honor of our clergy we must trust.

But curious am I
Bound for hell, I won’t deny
Where’s the logic in this edict so profound
Men  can do it round the clock
With no thought of babe to rock
My discrimination case is very sound.

One more way the church conspires
Oppress the women, threaten fires
Hell and brimstone are their futures without doubt
Beaten, raped and degradation
For one reason – elevation
And the excuse to let your fucking prick workout.

While sitting in my happy spot
A spot I sought to sit and rot
My brain
A spot where i could not be caught
Where perhaps a thought just might be wrought
With strain
I reached out for my friend.

Upon a branch it did alight
A fright it gave while ending flight
O’erhead
A mockingbird not very bright
With voice too shrill, I wished it might
Be dead
So a message I would send

To his voice i tried to close my mind
And hoped some other he would find
Indeed
Jose and I, here to unwind
Just solace and peace for us sublime
We need.
The fucking bird had too much gall

And found the target, true and neat
Knocked said bird off fucking feet
Aplop
Upon my head he sent his shite
The crap and fall, caused his heartbeat
To stop
Another tequila sundown.

Today, I am tired.

I am tired of the political $candal$
Erupting daily
A way of life in 2014.
as parti$an chicken$
finally come home to roo$t.
I am tired of their demand for entitlement
no longer ‘a $ense of’;
they have made it a fact.

I am tired of bullying and lying
being the qualitie$ that are valued
in a person of bu$ine$$;
of the ‘anything goe$’
when it come$ to putting
a dollar in their wallet;
of hypocritical elite crying ‘foul’
when $omeone el$e doe$
what they al$o do.

Today, I am tired
of watching good people work harder,
longer, for le$$ pay, no compen$ation
and never a thank you.
I am tired of hearing
‘they all do it’,
‘they don’t care’,
‘it’$ just the way it i$’
when in regard to human right$,
$afe work condition$,
corporate and political ethic$,
the law,
the food we eat
and the water we drink.

I am tired
of never hearing the word$
‘it’$ the right thing to do,’
of tho$e who make the law$
and enforce the law$
being above the law$;
of those who need help mo$t
being denied that help fa$te$t.

I am tired of living in a $ociety
that hide$ under the robe of God
$o they never have to
turn the other cheek,
and while they conveniently forget
the one golden rule,
decrying all other God$
using Him as a mean$ of
political expedience,
hate mongering while tapping into
His bountiful fountain of
tax-free revenue.

I would like once more to hear
the moral man’s voice,
see the good corporate citizen
display humanity to ‘human assets’,
to see societal moral compasses
live by their own words.
I crave respect – respect for others,
respect for ideals, beliefs, traditions,
for ourselves, our land, our world,
instead of this quagmire,
this clu$terfuck of ‘me’ and ‘mine’,
for$aking all else
for the dollar in their wallet.

The Modern Miracle of Political Proficiency

Pandemic bugs
Swine flu? Oh dear!
Save us first
Then we’ll help you.
The fear’s the game
Some bait and switch
Don’t worry
We know what to do
Justification
For any plight
Panic – a renewable resource.

Shiny shiny
Over here
Just trust us.
I will sing for you.

bombs galore
new acid rain
soldiers die
mothers cry
in ivory halls
lets pick our fights
not wrongs or rights
rather who will grease our palms.
no nitty gritty.
what a pity
blood – a renewable resource.

Might is right
The rest? who cares.
My state dinner and
peace prize await.

Dirty air
No water fresh
Species die
Their mothers cry
Ice caps melt
Earth shivers and shakes
We need new ways to turn a buck
Gather round
For words profound
Copenhagen? Sure,
Bring me a beer.
Pitter patter,
can’t get at ‘er
stupidity- a renewable resource

Some press! Some press! My kingdom for some press!
A baby to caress
An issue to obsess
A pancake to flip, christen a ship,
Profound words from my lip
Yes, stroke me!

Some power! More power! Unbridled power,
Above others to tower
Blare horns, toss a flower
To send men off to war
Then I’ll send a few more
I don’t need to say why –
I’ll command it; they’ll die
Watch as mothers grieve, cry
It strokes me.

Fear him! Jeer him! Vote not for my foe
Tell him ‘say it ain’t so’
Watch. Your taxes will grow
The economy slow
It’s all his fault, you know,
But I’ll make things sound
Bank profits abound,
Get more oil from the ground
Now stroke me!

An ‘X’! An ‘X’! By my name put your ‘X’
Watch the muscles I’ll flex
It’s much better than sex.
With my mandate held tight
Now bend over, don’t fight
This won’t hurt. You’re so tight!
Time to fuck you, alright?