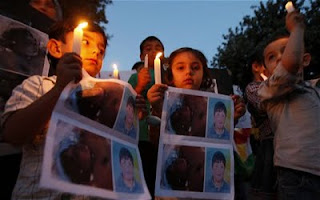 DATELINE: LOST IN THE HEADLINES, FOR ALL THE WRONG REASONS – It lacks glamor and glitz -- in fact, it’s horrifying. It has no celebrity endorsement because it could be viewed as a political hot potato. In some countries, sadly, it’s the norm, so they look the other way, buy the propaganda and spin, because they have no choice. Well, I have a choice, and my choice is to say it’s time to pay fucking attention to this.

A boy, thirteen years old, was murdered by his government. His name was Hamza al-Khateeb. It doesn’t have the same ring to it as say Brittney Spears or Paris Hilton, but this boy has reason to be in the news, and it isn’t because he went and got a new fucking tattoo or a Brazilian body wax. This boy was taken by the Syrian military under the orders of President Bashar Assad. He was shot three times, he was tortured for a month, there were burn marks on his body, his kneecaps were shattered, his penis was cut off, and once he had died, his body was returned to his family, along with a wheelbarrow full of bullshit stories about what happened to him and how he had not been tortured or suffered at all. The family, going public with the story, then faced the wrath of the government even more, to the point where they were intimidated enough, scared shitless enough, that they went on television to sing the praises of the great gregarious Assad.

But this is just the tip of the iceburg. A four-year old in Syria was shot in her village… I can’t for the life of me imagine what the hell threat a four-year-old is to soldiers with machine guns, but apparently they believed her to be, and murdered her. A busload of children was also fired upon. In the town of Rastan, people cannot even walk out their doors to go to prayers because the minute they step outside, they are shot. This is not life. This is not right. But North American media’s probe into the situation: ‘What does Bashar Assad have on his iPod?’ I am not making this up… it was a burning question that begged an answer. What the fuck is that about? We have now taken fluff from pointless and tasteless and tossed it way across the line to insulting and obnoxious.

The news today? A hockey player bit another one in a fight on the ice… whoop-de-fucking do. John Edwards is facing indictment? Well, good. The bastard brought it on himself with his greed and his uncontrollable dick. That peach of a general from Bosnia, Ratko Mladic, is pleading for compassion because he is sick with cancer; well, yes, I guess I am a cold heartless bitch because I hope he suffers and lingers and that he still stands trial because that man was a fucking monster who showed no compassion to anyone in his life, but rather found intense joy in dishing out torture to people for no reason. Karma’s a bitch too, Ratko, honey; pull on your big-boy panties and take what’s coming to you. And of course, what the fuck is a day in the media without Sarah Palin and her pretend but not really US tour/campaign to see how many idiots actually will believe she is on a family fucking holiday so she can campaign AND still collect her nice fat paycheck from those apparent morons at FOX. Sarah… please just piss or get off the fucking pot. You are not news, you are not special, and you are not particularly clever so fuck off and let some real people with some real skills and brains and ideas try to help the world instead of milking it for all it’s worth.

Pay fucking attention! People… children… are being tortured by their own governments. Now Iran, and that rocket fucking scientist Mahmoud Ahmadinejad, is coming to the rescue, sending troops in to help his buddy Bashar, and we will sit back and watch, and turn the channel so we don’t have to see.

But let me ask you this… IF that happened here, IF one day we woke up and found that a despot in disguise had managed to get into power, what would you do? It’s not beyond the realm of possibility. For starters, we have Steven Harper with his very blatant disrespect for all things democratic and his attempts to circumvent process at every possibility all for the single purpose of maintaining political power. Look back a few years… a man named Adolf Hitler was democratically elected as well. It can happen, and who will help when it does?

We sit back and say that Bashar will change. Well, hello?? What the fuck planet are you on? He will not change because he does not have to because no one holds him to account. There are a shitload of fucking asshole leaders in the Middle East all sitting back praying that their people will stop demanding to be treated with even a modicum of respect and that they might have just one or two human rights… how dare they… so these leaders have absolutely no desire to get involved, because ‘there but for the grace of Allah, go I’. The rest of the world… there might be oil there, so we can’t piss them off.

The people in Europe needed help to regain their lives back from the Nazi regime. The people in South Vietnam were being brutally tortured and systematically wiped out by North Vietnam. Korea? The Chinese and North Koreans had chosen those in the south for their targets. Bosnia, the Sudan… the list is long of people who are brutally wiped out because they want to have a life, because they practice the wrong religion, come from the wrong town, because they dare to say ‘enough’. It’s time for the rest of us to say ‘enough’ on their behalf, and I will give kudos to Hillary Clinton for at least having the balls to state clearly and publicly that this is unacceptable, apparently a lone voice among the politicos of the world.

For one minute, imagine your life waking up in the morning, not able to step out your door because you will be shot. Imagine spending every day in abject terror because you have no idea who will want to murder and mutilate your baby. Imagine the panic in your heart as you search for your child who was there with you one minute, gone the next, then receiving his body back full of holes, covered with burns, tortured almost beyond recognition, and receiving blatant lies about what happened to him. Then imagine what you would do if you knew others with a better life were looking in, watching, then shrugging and saying ‘sorry, but it’s a civil matter’. A civil matter? A civil war? There is absolutely nothing civil about any of this. It’s barbaric by any terms, and it’s time we made that known.
Posted by Bambi at 8:40 AM