Enough is Enough for Our Canada 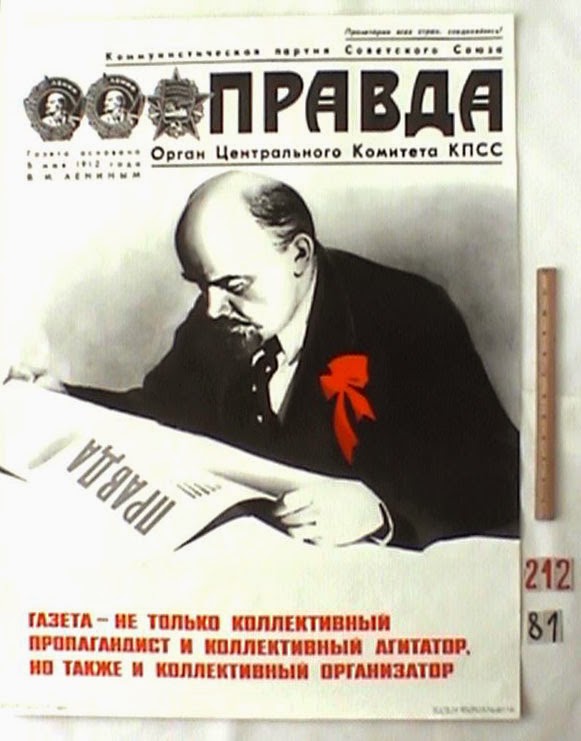 Remember being in school and learning about how horrible it was that the Russian government controlled the media? We heard the word Pravda, and learned it was about propaganda and a corrupt government. Remember how horrified you were when, a few years later, you studied about how a man named Adolf Hitler was elected to public office, and about how under his regime the poor and challenged were persecuted, how books and scientific data were destroyed, about how people were persecuted because they weren’t part of the perfect race? We shook our heads in disbelief because in our world, in our Canada, this could never happen. Remember when elections were discussed, and how in some countries the process was fatally flawed, making a mockery of the entire exercise as blatant election fraud ruled the day? Canadians were called in to help organize and oversee elections because of this, because we so valued the ability to make that little X on a piece of paper. Remember learning that in some places in the world, to speak your mind or to stand up for what was right was a sure death sentence, or at the very least a ticket to jail, with no legal process, for a lot of years? We actually scoffed at that. In Canada, individual voices and opinions would always be welcome, and if someone stepped out of line, if someone broke the rules by trying to silence us or lock us away, we simply would not let that happen. We were Canadians. We were proud, and we had reason to be. 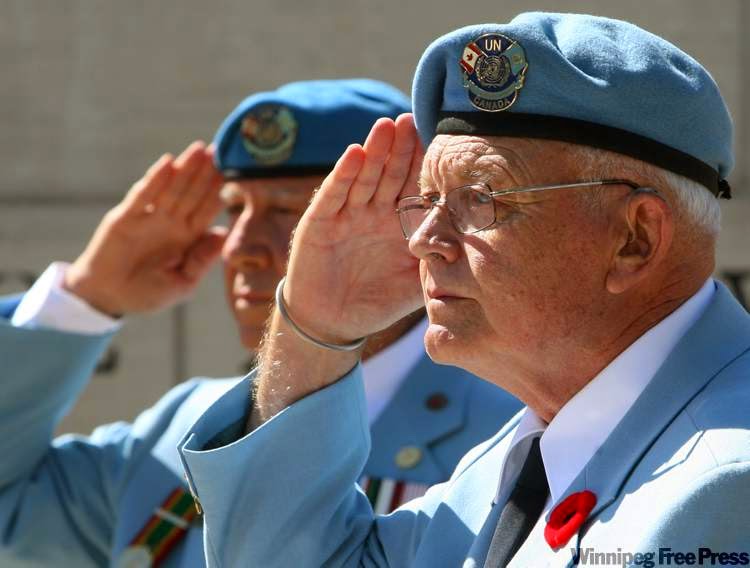 Canada had the model health care system. We had one of the best education systems in the world. We were innovate, warm, caring members of society. Other countries talked the talk about equality and inclusion, about fairness, welcoming the downtrodden, feeding the tired and hungry; Canada walked the walk. When we said we would send disaster aid to countries in the midst of disaster, we actually sent the money. When we sent Canadian men and women to protect and defend, promising to take care of them and their families because of our respect and gratitude for their sacrifice, we lived by our bond. When other countries needed peacekeepers and mediators, we were the go-to guys, because we respected human life and humanity. We said those horrible things that happened in other countries, in those backward countries run by greedy war mongers and thuggish dictators, could never happen here, because we knew daily, intimately, thoroughly that the rights and the lifestyle we enjoyed had been secured for us through the blood, sweat, and lives of other Canadians, and there was no way in hell we would let them down, or gamble with that precious gift they gave us. No, this could not happen; not in Our Canada. 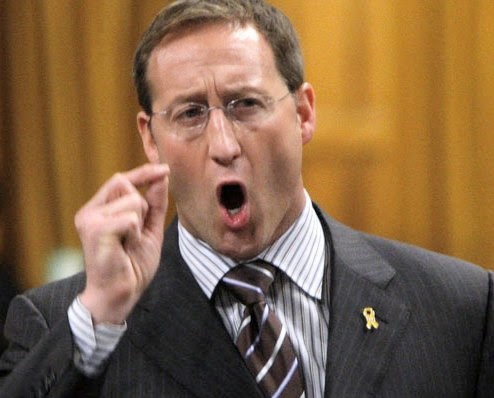 Well, now it’s all reality. The mere fact that I write this blog, once bill C-51 passes, means that I am... wait for it... a terrorist. Let that soak in for a minute then consider how we got to this point in our world. The mere mention that our government is wrong, and that we should not sit idly by as absolutely everything Canada has stood for, and that Canadians have died for, makes me... a terrorist. Because of this, once bill C-51 passes, I will not be entitled to any of my legal rights. They can tap my phone, bug my house, park drones outside my windows, intercept my emails and every private conversation I have now, requiring no legal justification and with absolutely no oversight from any judge, because I am involved in terrorist activity. The government, when asked for a definition of terrorism, thuggishly told us we should ‘look it up’. Stalin would be giddy! When it was said that ‘of course legal protest’ would not be included, then why is that not stated in the Bill? When asked questions about the bill, we are called unpatriotic and it is claimed that we love terrorists... because we are their brethren. How better to silence anyone who disagrees with your policies or what you are doing to Our Canada than to create a law that allows you to circumvent all other laws. We ridicule countries where bloggers are sent to prison for blogging, where kangaroo courts are the order of the day because the judges are in the despots’ pockets. We marvel that there are still countries where people are imprisoned without cause but because they state to someone else a truth, yet we now allow this in Canada? 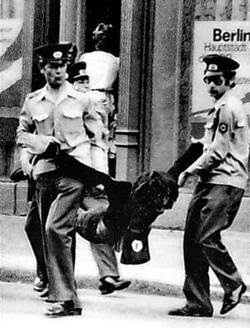 Terrorism is a political red herring. Wake the hell up, people. The attacks in Ottawa in the fall of 2014 were NOT terrorism. The provisions in Bill C-51 are NOT about terrorism and will do nothing new to stop it. The authorities already have the tools, the laws and the means to do their jobs. C-51 is about silencing Canadians, about making us completely impotent to change our situations or to hold the government to account. C-51 is about controlling people, allowing them to be locked away without cause, without a warrant, without regard for any legal right or precedent. Yeah, ISIS exists. Ask yourself why. In your answer, you will find a large part of the solution. ISIS exists because our governments let it. War is money – governments know this. Yes, it costs you and me, the taxpayers a lot of money, and yes, there are those who pay much more with their lives and their limbs, but war exists because there is good, easy money to make. All you have to do is fling around the word ‘Patriotism’ and you can shame people into letting you do anything. 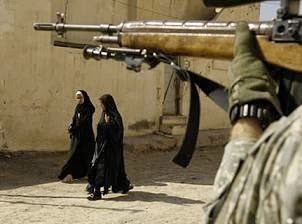 If the governments wanted to stop ISIS, they would simply turn off the tap. That’s the first step. Stop supplying our ‘friends’ in Saudi Arabia with weapons, money, and military equipment. Oh, wait... even though we KNOW they are providing supplies to ISIS, we just signed another deal with them... even though it is supposed to be illegal for people in our country to sell any of this shit to any country that has a questionable human rights record. We did it anyway... brokered by our government... despite our own laws and our own intelligence. Stop giving these countries money for their oil – invest in green and alternate energies. This one is a no-brainer. If they don’t have the oil money coming in, they shrivel up and die. The investment in alternate energies and green energies, also creates jobs at home, and that works a long way to the other key component – respect. Respect other religions, other people, and they have no reason to hate us. Address the issue of disenfranchisement, of mental health care, of environmental destruction, of a rapidly growing poor population and give them a reason to now look for alternatives to survive, other than to take drastic steps to stop the government. Take away the reason for people to want to terrorize us, instead of adding a dozen more reasons for it. 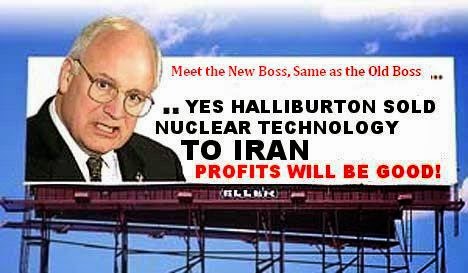 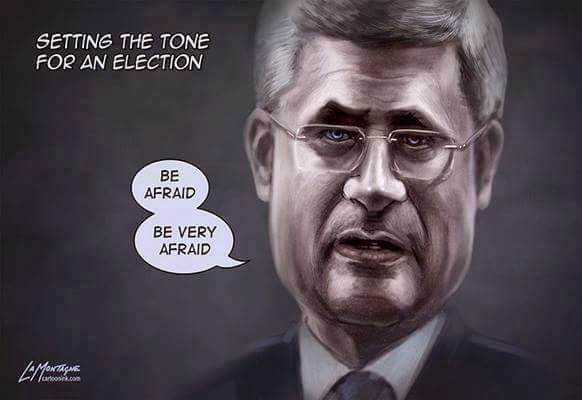 Terrorism is convenient though. It scares people, and scared people are blind people. We’re so busy running that we can’t take the time to turn around and see what the hell we’re running from. It’s convenient for governments to rule through fear – there is a long list of thugs who have done that through the centuries. It’s a well-known tactic. If we look at the scary terrorists, we don’t see the failing the economy, the growing cronyism, the patronage, the abuse of power, the disregard for human and legal rights, the destruction of democracy, the lack of jobs, the lack of education and health care, the growing prisons and the money they generate for so few, the burgeoning profits of the banks and the oil companies. We so busy being afraid of beards, and gathering places, and pieces of clothing, and books, that we absolutely are not looking at what we should really be fearing, before it’s too late. Sadly, the process adds justification and feeds the terrorists, and the new definitions of what terrorism now is absolutely insults those who have lost their lives fighting real terrorists.

Not in my Canada? That was the dream. Now it is the nightmare, The only way to stop it is to risk everything – by speaking out.
Posted by Bambi at 7:08 AM