I am done with the mainstream press. It’s as simple as that. I will no longer allow puppets to set the agenda for my life. Amid the intricate cogs required to keep the wheels of democracy turning, the one labeled Fifth Estate is seized. It’s FUBAR. A free, independent press is the cornerstone of democracy – without it, the rest crumbles to ashes. Well, look around you. That ship has sailed, and in large part that is due to the fact that the press was nothing more than a cheap whore standing on the corner, wearing a short leather skirt and letting her boobs hang out, reminding politicians and the corporate elite that absolutely anything, even cornerstones and democracy, are up for grabs. It is this fact, and this fact alone, that has destroyed democracy, and is to blame for the loss of countless thousands of lives.

Gone are the principled, tenacious Woodwards and Bernsteins who, despite being ordered to back off, could smell the blood in the water and demanded of themselves to find out where the bodies really were. Of course, having done that and discovering that there was a bigger payoff in movie and book residuals... These two men were my idols growing up. They did what was right. It was an unrepeatable event, I know – that thing that happens only once in a lifetime, but I am so very thankful that I saw it at least once in my lifetime. I am not so sure that my children will ever see something like that in their lifetimes.

Now our mainstream media is nothing more than the paid propaganda machine, the Joseph Goebbels of our time, telling us what they want us to hear. They aren’t totally to blame. We have made the choice to listen, despite knowing that what they are saying isn’t totally accurate, or that the main part of the story is neatly tucked away where we’ll never find it. We have Brian Williams admitting to lying about a story, and perpetrating that lie for years. We have Amanda Lang keeping secret a massive conflict of interest, and allowing that to skew the true story. We have CNN and, well, every other media outlet, looking for the best, catchiest, cutest title for whatever story they have decided will own the day, and they will cover nothing else but that story. We have Peter Mansbridge selling his soul to ask the most ridiculous, softball questions of a crooked Prime Minister, and challenging absolutely none of the blatant lies he is offered in response. We have Fox... well, let’s not even go there; this is about news media, and anyone who does not or will not see what Fox is doing then deserves the crap that will befall them. Even Sarah Palin readily accepts and states that Fox is – ‘a quasi or assumed Conservative outlet’. The press is not doing its job when it can be labeled as supporting one side; you know, it’s that pesky unbiased, fair thing that catches them up in this regard. 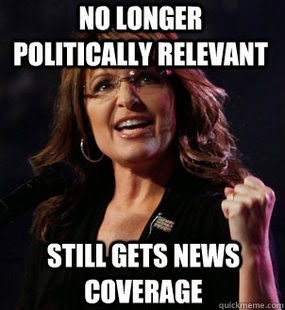 We have a lot of problems in this world. Funny thing, though, is that all of them work to the advantage of the corporate elite. All of it makes money for them – the war on terror in particular. Listen to politicians and the media talk about this. They work overtime to inflame the situation, daily widening the chasm between two groups of people. Ask yourself who benefits from all of this. It’s the people who make the weapons. The more they can stir up shit, the more weapons they sell, and they stack the deck, because they arm both sides. Where did ISIS get their weapons? When are we going to learn? In every conflict the same shit happens, and we sit on our sofas and allow this BS to spew forth from our sets, lapping it up and fearing the Russian, Cuban, Columbian, Mexican, North Korean, Muslim – you pick – hoards. The biggest winner in the Gulf Wars was Haliburton. There is no question there. Look back on other conflicts and see where the weapons came from. I’ll give you a hint – there will only be a few names that pop up. 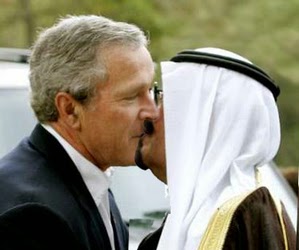 Canada just signed a deal to give more military supplies to Saudi Arabia. We have a law here that says we are not to sell arms or supplies to countries that will use those arms or supplies against their own people. I guess that only applies when the people are women – then it’s open season. I guess those laws also don’t apply when we know that Saudi Arabia is passing some of those supplies on to our own enemies, either directly or through back door deals. War is guaranteed income. If we don’t fight, there is no more money to be made. That means, to the puppet masters, war is essential because people like the Bush family will never have enough money. 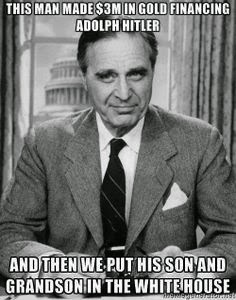 The other benefit though, is that while we are being inundated with looped video of beheadings, the stories we should be hearing are ignored. We’re too busy fearing that ISIS is going to knock down our door and cart us away. We’re too busy giving up our freedom to speak, to write, to think. We’re too busy allowing the government to have access to everything we do, without cause or oversight. The governments are doing this because to them, there is nothing more important than being in power. They love it. Hey have to be there because no one else could do it as good as they do, and because there are definite financial benefits to paving the roads for the beautiful people to drive on. Voters? Who needs them? Democratic elections are nothing more than fraud now. The gerrymandering, the money raising, the robocalling... none of this would be accepted in a democratic, free world. 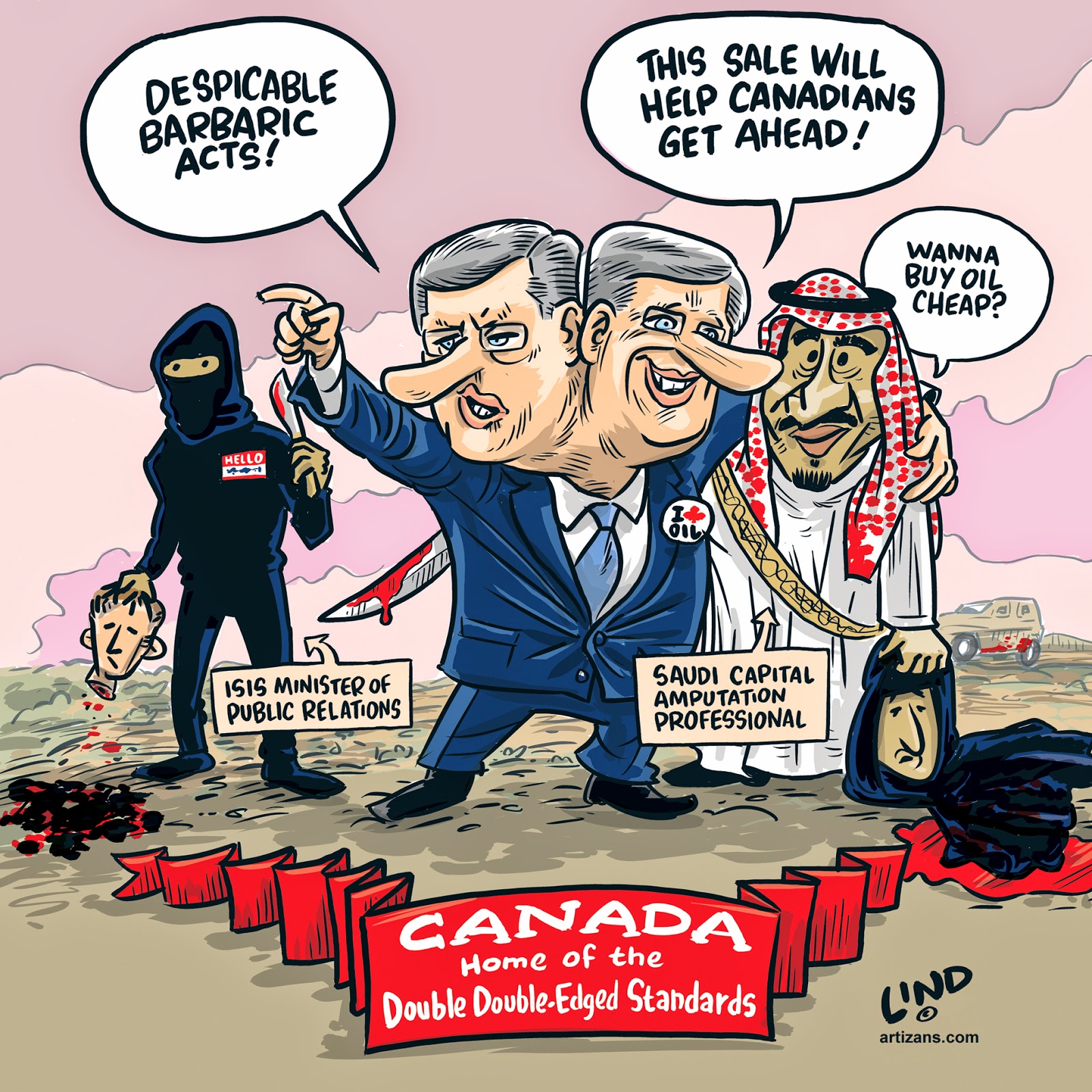 The politicians, though, aren’t controlling the string. The media has been bought out, and has sold us out, pretty much across the board. Why don’t they cover the slaughter in Nigeria? Because there is no economic plus to it for the people selling weapons. Why, at the time of every school shooting, are people not asking about the guns? Well, you know why. You know the way to solve the problem, but instead it’s just so much easier to allow the NRA and fear screw with your judgment. Why are we hearing every day about Christianity being threatened? Because it’s how you make war. Say what you will about religion, it is sure to always and forever be a money maker for fear mongers and arms sellers. Why are there still people debating the science of climate change? Because it’s not convenient to those who want to make the money from war and oil. Why are people like Sarah Palin and Mike Huckabee still given air time? Because they are morons and easily led, despite the absolute utter hypocrisy of their words and ideals: they are fear mongers of the finest kind, and critical to keeping the rest of us cowering and looking in the wrong direction. Why are we being told to panic about the economy right now? Because it’s all designed to make us believe that the only way to salvation is pipelines, pipelines that will do nothing for us. It’s a bit of a Hail Mary pass on the part of the oil companies, but put the value of a barrel of oil into freefall, watch currency fall, watch jobs disappear, and watch the people come running begging for a damned pipeline, giving the oil companies everything they want and more. 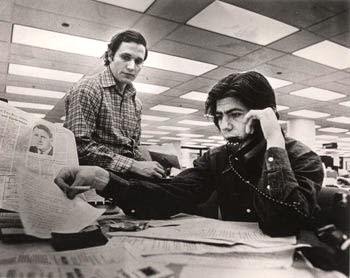 The media isn’t the pawn in this game, though. They aren’t being moved around on a whim. They are controlled from within, and are now masters of prestidigitation, their sleight of hand never better as they dazzle us with Snowmagedons or Shock and Awe. It's about stacking the deck against us, against the small business, the upstart, the working man. It's about keeping us in our place, and the best way to do that is to keep us distracted, poor, and working our asses off so we're too tired to notice. We listen to the rote answers, repeated dozens of time, word for word, in an attempt to make us not question, or not think, reminding us that we’re really nothing more than petulant puppies and that whacking us with a newspaper enough times will get the 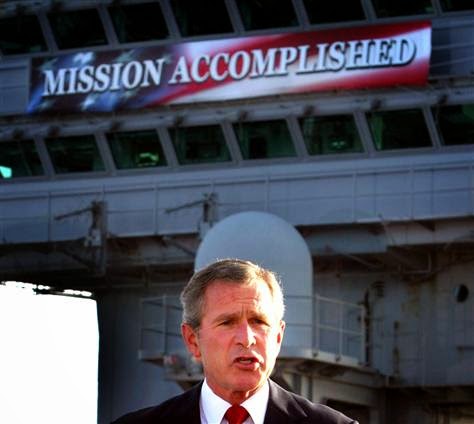 message through to us. The truly criminal part of all of this, though, is that we’ve let them. The only chink in the armor, for the last 80 years, has been the exposure of Watergate. It’s the one thing that we should remember, daily, because the press did what it was supposed to. It hasn’t happened since. I suspect it never will, at least not in the mainstream media. Mission accomplished? Oh yeah, a lot of missions accomplished, just not the ones the rest of us were privy to, and certainly not ones that are intended to help us. They play us well.
Posted by Bambi at 7:41 AM