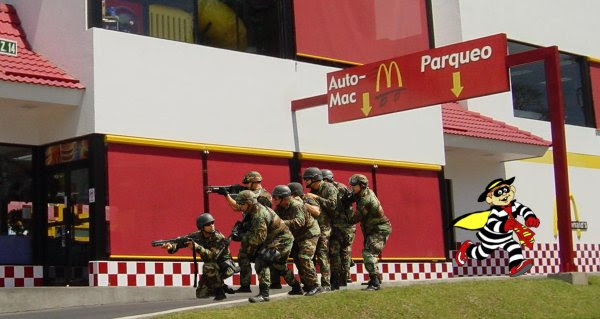 DATELINE: NEW JERSEY – We will start with a Good Friday Fish Story. A patron in a McDonald’s drive-through was desperate for a fucking Filet-o-Fish sandwich. For starters, real men don’t order anything that has such a cutsey fucking name. Anyways, he was told that it would take three minutes for his order to be ready, while they cooked the fish. Apparently displeased with this information, he went totally fucking ballistic, crawled through the drive-thru window, shouting and screaming at the attendant, raised a stink until his fish was ready, and left without paying. Police are still looking for him.

DATELINE: VANCOUVER – It would appear that the whole issue of the murder of Robert Dziekanski is in the history books – sadly so. While I appreciate that his mother, Zofia Cisowski has undoubtedly been through over two years of unmitigated hell and deserves a chance to put the issue to rest, the whole issue stinks. Now, because of a public apology and a cash settlement, all is fine and she is not interested in seeing the men, the policemen, who murdered her son face any criminal charges. Funny how, upon reading and hearing all this, I was made to think of the hundreds of parents who did the very same thing with regard to catholic priests abusing their children, agreeing that perhaps because they could not take any more of the legal bullshit, because they were tired of the fighting and the crap that comes with this, because they knew they would be facing many, many years more of this, it was just easier to accept what was being offered and let the issue disappear. That the RCMP has managed to get the issue, both the criminal and the civil actions, to stop, that they have managed to purloin a complete and total pardon from all responsibility in the taking of this man’s life is nothing but fucking shameful.

DATELINE: TV LAND – Sarah Palin’s new FOX program ‘Real American Stories’ premieres tonight, and even before she has started, there is already controversy surrounding it. In the promo for the show, clips of interviewees are flashed across the screen, people like Toby Keith, LL Cool J, Jack Welch that she has interviewed for the program, but WAIT! According to LL Cool J and his Tweets, the opening of Real American Stories is filled will Real American Deception. "Fox lifted an old interview I gave in 2008 to someone else & are misrepresenting to the public in order to promote Sarah Palins Show. WOW." Gotta love that LLCool J and his tweets! So, how’s that Twitter thing working for ya so far, Sarah? *wink wink* In response, a Fox spokesman has said that in response to LL Cool J ” …we are cutting his interview from the special and wish him the best with his fledgling acting career." I would venture to say that LL Cool J shows MUCH more potential and talent, and without doubt intellect and pizzazz that Ms Palin could ever fucking hope to show. It will be interesting to see their response to Toby Keith who has now contacted the New York Times to say that he has never been interviewed by or with Palin, and that he had no idea he was being used for the show. His publicist, speaking on Keith’s behalf, said they believe FOX will be ‘recycling an interview Keith gave in 2009’. Yup, me suspects this shall be a Comedy of Errors from fore to aft, one of gargantuan proportions.

DATELINE: HARBIN, CHINA -- If you believe in reincarnation, the last fucking thing you want to come back as is any animal that might end up in a zoo in China. Workers at the Harbin Northern Forest Zoo, frustrated with their inability to provide the care needed to take care of their animals, have revealed that last year they were required to dig a 10 foot deep pit to be used as a mass grave for 30-40 animals that had died from lack of care and proper nutrition. These animals included lions, tigers and leopards. The employees also reported that in the first half of 2008, 14 animals, including extremely endangered white tigers and white lions, had died from malnutrition. As a cost-cutting measure, the zoo enforced diet changes for the animals, resulting in some of the big cats even being fed corn buns instead of meat. Earlier last month, the zoo in Shenyang was closed when it was revealed 36 animals had died amid allegations of body-part harvesting, including 13 endangered Siberian tigers whose organs were used to create such concoctions as tiger-bone liquor, thought to boost a man’s virility. Nothing says I Am A Man like killing a beautiful endangered, CAGED animal in order to get your boner up. Buy some fucking Viagra if you can’t get it up, but leave the damned cats alone.

DATELINE: MASSACHUSETTS – In his first comments since charges were brought against some of his students in relation to the death of Phoebe Prince, Superintendent Gus Sayer managed to remove a lot of doubt as to how this sort of thing could happen. Yes, in true political fashion, he opened his mouth and crap spewed out, which was a bit of a challenge after the ass hat comments made by school Chairman Edward Boisselle, who took ass-hattedness to whole fucking new level. Sayer’s comments regarding the findings of the official investigation were unfortunate, his speculation regarding the sources of official information, his audacity to border on calling Prince’s parents liars when it came to them reporting the information, were pretty much asinine. However, his comments, and their implied meaning, regarding his surprise that the DA drew such a strong connection between the bullying and Prince’s death, that it was an assumption on the DA’s part but that something other than school could have caused the girl to take her own life, was beyond fucking ignorant. That he would even try that crap is more than reprehensible. And Boisselle? His resorting to semantics about who knew and then arguing that the absent Sayer ‘has never taken the amount of vacation that he has coming to him” as an excuse for him not stepping up in a timely manner? Here’s the thing… it sounds as if they are spending a whole lot of time making up lame-ass fucking excuses for the fact that they have spent a whole lot of time in the past year NOT DOING THEIR FUCKING JOBS. A girl is dead, she is dead because of the actions of other people, including the adults charged with the responsibility of teaching and protecting a school full of students, and in the process they have totally disrespected Miss Prince and her family in the process as a means to cover their own fucking guilt. They have failed on all counts.
Posted by Bambi at 9:32 AM